ALBUQUERQUE, N.M. — Have you ever started a new job and spent a lot of time figuring out everything from how to get paper for the printer to whether an important customer prefers quick phone calls to emails? 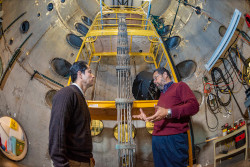 In this photo taken prior to the COVID-19 pandemic at Sandia National Laboratories’ boiling water reactor test site, Tito Bonano, right, shares his knowledge of nuclear energy research with Efrain O’Neill, an electrical engineering professor at the University of Puerto Rico, Mayagüez, who recently spent a year at Sandia. (Photo by Randy Montoya) Click on the thumbnail for a high-resolution image.

Imagine if that important customer was the federal government and the project you were working on was evaluating the development of a geologic repository for the permanent disposal of spent nuclear fuel and high-level radioactive waste.

Experts at Sandia National Laboratories just began their second year of a project to capture important, hard-to-explain nuclear waste management knowledge from retirement-age employees to help new employees get up to speed faster.

“At Sandia, we’ve had over 45 years of experience in nuclear waste management in the U.S. and internationally,” said Tito Bonano, nuclear energy fuel cycle senior manager. “But the expertise and experiences of people like myself, Peter Swift, Ken Sorenson and others that have retired or are retirement age, walks away when we leave the organization. We refer to that kind of expertise and experiences as tacit knowledge, and we had to act to stop the bleeding of tacit knowledge.”

Tacit knowledge includes understanding the boss’s opinions as to why a competitor is doing well or the best way to work with an important customer. Such knowledge is often difficult to explain. Explicit knowledge, which includes things such as a phone number or the temperature of water, is easier to document and communicate to others.

Explicit knowledge can be captured in reports and spreadsheets, but tacit knowledge is often learned through mentorship, observation and practice.

“Most large organizations, laboratories and government agencies are very good at saving their explicit knowledge, in the form of reports and documents,” said Janette Meacham, the nuclear energy fuel cycle program’s licensing and knowledge management lead. “But the knowledge that comes from going into Tito’s office with a difficult problem and having him say, ‘I remember 15 years ago we did something similar, and this is how we did it, and you need to watch out for this other thing,’ is not captured in a report.”

Through focus group discussions,  a multiday workshop, a series of four-hour deep dives and recording interviews with retiring employees, the knowledge management team led by Meacham captured this tacit knowledge and is in the process of organizing and tagging it to make it easier for early career and new employees to access.

Preserving this contextual knowledge will save time and U.S. taxpayers’ money, especially when the federal government begins work on a permanent nuclear waste disposal solution, Bonano said. He added, “As a federally funded research and development center, we have a responsibility to be good custodians of the knowledge we’ve developed to benefit future projects.”

Starting in 2019, the team conducted focus groups with employees who had been with the organization less than five years, five to 10 years and more than 10 years to discover how each group best learns and wants to access information. 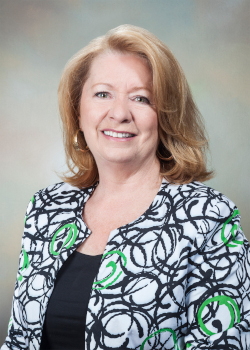 Then, Sandia hosted a three-day workshop with experts, retirees and federal representatives. Each speaker had some prepared remarks, but the most valuable part of the workshop was when the experts responded to questions from the audience, Meacham said. About 50 Sandia employees at all stages of their careers attended the workshop to learn directly from the experts, and the workshop was recorded for future reference.

They also hosted a series of four-hour deep dives on complex topics, such as how to effectively get expert opinions for risk assessments and understanding how various regulations on nuclear waste management overlap with each other. Each deep dive was led by an expert who started the discussion with prepared information and then answered a lot of productive questions from an audience of 15 to 20 employees. The sessions were also recorded. There were six deep dives last year, and there will be four more later this year.

Also, as other important topics come up in the ordinary course of business, the team records interviews with experts and recently retired employees to capture their tacit knowledge.

The recordings of each session or interview, searchable transcriptions, the experts’ slides and links to the documents they referenced are all available to Sandia nuclear energy fuel cycle staff via an internal archive. Eventually, Meacham hopes to have the archive accessible to the Department of Energy and experts at other national laboratories.

Already the internal archive has seen significant use. In an average month, it gets about 2,000 visits from the 180 employees within Sandia’s nuclear energy fuel cycle program, Meacham said.

Expanding a culture of preserving knowledge at Sandia, abroad

In addition to the recorded sessions, Meacham is working on developing a culture in the organization where capturing tacit knowledge is just as important, and just as an integral part of the job, as capturing explicit knowledge in the form of reports. To that end, she is leading the construction of a taxonomy to tag the recorded seminars and interviews and such explicit-knowledge resources as reports , as well as a more sophisticated database where employees can easily add tacit knowledge. The goal is to make all the information more accessible.

“The first part was getting those interviews, grabbing that information quickly while we could and stopping the bleeding,” Meacham said. “At the same time, we have to come up with an overarching system of capturing that information as it is created. We need to make it part of the normal work processes of the nuclear energy fuel cycle staff, and staff across the labs.”

In the future, Meacham and Bonano hope to extend what they’ve learned about knowledge management, capturing tacit knowledge and making it accessible to early career employees to other portions of Sandia and other agencies.

They already have been asked to collaborate with colleagues at the Nuclear Decommissioning Authority in the U.K., the Nuclear Waste Management Organization of Japan and other international agencies as they undertake similar knowledge management projects.

“Everyone else seemed to be talking about the problem of maintaining important knowledge, but we said, ‘We’ve got to do something about it now,’ so we just did it,” Bonano said. “It’s part of Sandia’s attitude that we’re here to solve problems.”

The knowledge management project for nuclear energy fuel cycle was funded by the Department of Energy’s Office of Nuclear Energy.