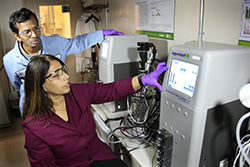 Sandia National Laboratories researchers Arul Varman, left, and Seema Singh, who is the principal investigator, are part of a team that mapped the metabolic pathway of a bacteria that lives solely off lignin. The breakthrough, published today in PNAS, could lead to economically feasible biofuel production. (Photo by Dino Vournas) Click on the thumbnail for a high-resolution image.

LIVERMORE, Calif. — Abundant, chock full of energy and bound so tightly that the only way to release its energy is through combustion — lignin has frustrated scientists for years. With the help of an unusual soil bacteria, researchers at Sandia National Laboratories believe they now know how to crack open lignin, a breakthrough that could transform the economics of biofuel production.

Lignin is a component of lignocellulosic biomass, the dry plant matter found virtually everywhere. As a biomass source that does not compete with food or feed, lignin is critical to biofuel production. Lignin makes up the fortress-like cell walls of plants to enable water transport against gravity while protecting them from microbial attack and environmental stress. These beneficial traits make lignin hard to break down and even harder to convert into something valuable.

By following the metabolic pathway of an unusual soil bacteria that lives off lignin, Sandia research team members led by principal investigator Seema Singh believe they can develop technologies to break down lignin and extract valuable platform chemicals. High-value chemicals like muconic acid and adipic acid can be derived from the platform chemicals.

The work is reported in a paper titled “Decoding how a soil bacterium extracts building blocks and metabolic energy from ligninolysis provides road map for lignin valorization” published on Sept. 15 in Proceeding of National Academy of Sciences. The work is funded by Sandia’s Laboratory Directed Research and Development program.

Biofuels simply don’t work as a replacement for gasoline due to the high cost of production.

“Gasoline is a low-value, high-volume product. This is balanced by the high-value chemicals derived from about 6-10 percent of every barrel of oil,” said Singh.

Lignin is seen as a byproduct of limited use, typically burned for its energy content. Using biomass for chemical production could yield at least 10 times more value, compared to burning it to make electricity.

For inspiration on how to break down lignin, the researchers looked to nature.

“We know that over a long period of time fungus and bacteria do eventually break down lignin,” explained Singh. “If we can understand this process, we can use what nature already knows for biofuel and chemical production from lignin.”

Since bacteria are easier to engineer for industrial production of desired chemicals, the researchers focused on bacteria. The best candidate was Sphingobium, or SYK-6, found in the lignin-rich waste stream from wood pulp production.

SYK-6 was extremely intriguing because it only feeds on lignin. Microbes generally live off sugar, which is much easier to break down and extract energy from. Imagine a choice between eating a corn kernel or a corn husk.

“In terms of thermodynamics, it doesn’t make sense for this bacteria to go after lignin instead of sugar,” said Singh. “It does not metabolize sugar. So, how does it survive? We knew SYK-6 must have a special mechanism to break down the strong linkages of polymeric lignin.”

Just as following the money is key to investigating corruption, the researchers set out to follow the carbon to understand how SYK-6 lives off lignin. When the bacteria metabolizes lignin, it ends up via different pathways in various metabolite and building blocks. By following the carbon from start to finish in various networks — a method called metabolic flux analysis — the researchers hoped to map the metabolic pathway.

“This was the first time metabolic flux analysis was used to track lignin metabolism in a microbe,” said Singh. “Identifying and locating labeled source for the carbon substrate that could serve as a realistic surrogate proved very difficult.”

Because of the complexity of metabolic pathways, running the experiments did not yield an immediate answer. Singh describes it as “putting together the pieces of a fascinating puzzle driven by analysis.”

The Sandia team’s paper reports the method used to decipher the metabolic pathway of SYK-6.

The next step is to engineer a microbial chassis to harness SYK-6’s metabolic pathway. The trick will be to stop the pathway at the right step to extract a useful product. Platform chemicals, which can be used to derive valuable chemicals like muconic acid and adipic acid, are the goal.

One path forward is to genetically engineer SYK-6 to stop its metabolic process at a point when platform chemicals can be extracted from the lignin. Another path would be to splice the genes responsible for the important desired metabolic process in SYK-6 onto a strong industrial host like E. coli to create a chassis for desired fuels and chemicals. Singh and the other researchers hope to explore both options.

“This understanding casts lignin in a whole new light,” said Singh. “Now that we know how to begin deriving value from lignin, a vast resource opens up. Decoding SYK-6 metabolic pathway is providing a roadmap for lignin valorization.”