ALBUQUERQUE, N.M. — The Department of Energy (DOE) will invest $16 million over the next four years in supercomputer technology that will accelerate the design of new materials by combining  theoretical and experimental efforts to create new validated codes. 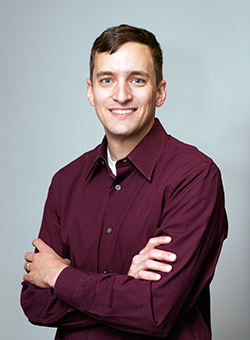 Sandia National Laboratories researcher Luke Shulenburger will lead efforts to investigate algorithms to aid in the design of next-generation materials with novel properties. (Photo by Randy Montoya) Click on the thumbnail for a high-resolution image.

Sandia National Laboratories researcher Luke Shulenburger will head a team working to improve algorithms that predict and show how to modify materials properties, a key element of the DOE project.

The program will focus on software development that eventually may run on exascale machines, computers able to make more than a billion billion calculations per second.

Paul Kent, director of the Center for Predictive Simulation of Functional Materials at Oak Ridge National Laboratory, explained, “These developments are needed to improve the applicability of today’s methods.”

The grants announced Aug. 16 are part of DOE’s Computational Materials Sciences (CMS) program begun in 2015 as part of the U.S. Materials Genome Initiative. The program reflects the increasing capability of high-performance computers to model and simulate matter’s behavior at atomic and molecular scales.

“We’re going to look at quantum materials with novel magnetism, optical properties and exotic quantum phases that make them well-suited to energy applications in an effort to understand and manipulate these properties,” Shulenburger said.

“We’re particularly interested in oxides. It’s easy to manipulate them to produce different properties,” he continued. “But it’s expensive to do Edisonian experiments on material after material and potentially easier and more efficient to do those experiments on a computer. That said, the current computational tools we have don’t work that well. With this four-year funded project, we intend to extend our capabilities. We’ve done some calculations with some success, but we need more.”

Sandia has a long history in the development and application of electronic structure — that is, solving algorithms quantum mechanically to calculate the properties of a wide variety of materials. Additionally, the labs boast considerable expertise in high-performance computing, with strong ties to the National Nuclear Security Administration’s Advanced Simulation and Computing (ASC) programs.

The overall research program will combine theory and software development with experimental validation that will take place at multiple DOE Office of Science User Facilities, including the Advanced Photon Source at Argonne National Laboratory, the Spallation Neutron Source at Oak Ridge, and several of the five Nanoscale Science Research Centers across the DOE national laboratory enterprise, including the Center for Integrated Nanotechnologies at Sandia and Los Alamos national labs.