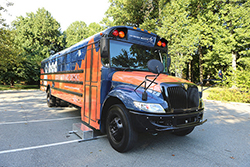 The Generation Beyond: Mars Experience Bus will stop in Albuquerque the week of Oct. 24, giving students a unique opportunity to visit the surface of Mars. (Photo courtesy of Lockheed Martin Corp.) Click on the thumbnail for a high-resolution image.

ALBUQUERQUE, N.M. — The world’s first virtual reality vehicle for groups of participants is making a stop in Albuquerque on a cross-country tour, giving students a chance to traverse the surface of Mars from inside a school bus. The Lockheed Martin Generation Beyond: Mars Experience Bus will stop at Tomasita Elementary School and Kennedy Middle School on Oct. 26 in an event organized by Sandia National Laboratories and Lockheed Martin Corp.

The Mars Experience Bus was a standard yellow school bus that has been retrofitted with virtual reality technology that replicates 200 square miles of the Martian landscape and displays it in the bus’s windows, giving riders the sensation they are moving along the red planet’s surface.

The bus is traveling across the United States as part of Lockheed Martin’s Generation Beyond national educational program, which launched in April 2016 to inspire future engineers, scientists and innovators to pursue science, technology, engineering and math (STEM) studies and careers. 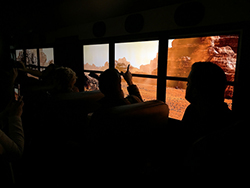 The Generation Beyond: Mars Experience Bus aims to inspire students to pursue science, technology, engineering and mathematics (STEM) careers. (Photo courtesy of Lockheed Martin Corp.) Click on the thumbnail for a high-resolution image.

“We are excited to partner with Lockheed Martin to introduce Albuquerque students to potential STEM careers. Many students are intrigued with the idea of being the first person on Mars, and with this event we’re showing them what’s possible,” said Amy Tapia, Sandia’s manager of community involvement.

The Mars Experience is more than a bus ride. Before boarding the bus, participants can design and print a custom mission patch; learn about NASA’s Orion spacecraft, which is being developed to take humans to Mars; and snap and print a photo of themselves on Mars with the help of a green screen. Sandia volunteers and the schools’ faculty will lead students through the various stations of the Mars Experience.

The bus will also make a public appearance at the National Museum of Nuclear Science and History on Oct. 29-30 from 9 a.m.-5 p.m. The Mars Experience Bus is included with paid museum admission.