ALBUQUERQUE, N.M. — By forcefully embedding two silicon atoms in a diamond matrix, Sandia researchers have demonstrated for the first time on a single chip all the components needed to create a quantum bridge to link quantum computers together. 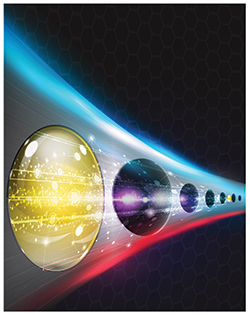 This stylized illustration of a quantum bridge shows an array of holes etched in diamond with two silicon atoms placed between the holes. (Illustration courtesy of Sandia National Laboratories) Click on the thumbnail for a high-resolution image.

Distributing quantum information on a bridge, or network, could also enable novel forms of quantum sensing, since quantum correlations allow all the atoms in the network to behave as though they were one single atom.

The joint work with Harvard University used a focused ion beam implanter at Sandia’s Ion Beam Laboratory designed for blasting single ions into precise locations on a diamond substrate. Sandia researchers Ed Bielejec, Jose Pacheco and Daniel Perry used implantation to replace one carbon atom of the diamond with the larger silicon atom, which causes the two carbon atoms on either side of the silicon atom to feel crowded enough to flee. That leaves the silicon atom a kind of large landowner, buffered against stray electrical currents by the neighboring non-conducting vacancies.

Though the silicon atoms are embedded in a solid, they behave as though floating in a gas, and therefore their electrons’ response to quantum stimuli are not clouded by unwanted interactions with other matter.

“What we’ve done is implant the silicon atoms exactly where we want them,” said Camacho. “We can create thousands of implanted locations, which all yield working quantum devices, because we plant the atoms well below the surface of the substrate and anneal them in place. Before this, researchers had to search for emitter atoms among about 1,000 randomly occurring defects — that is, non-carbon atoms — in a diamond substrate of a few microns to find even one that emitted strongly enough to be useful at the single photon level.”

Once the silicon atoms are settled in the diamond substrate, laser-generated photons bump silicon electrons into their next higher atomic energy state; when the electrons return to the lower energy state, because all things seek the lowest possible energy level, they spit out quantized photons that carry information through their frequency, intensity and the polarization of their wave.

“Harvard researchers performed that experiment, as well as the optical and quantum measurements,” said Camacho. “We did the novel device fabrication and came up with a clever way to count exactly how many ions are implanted into the diamond substrate.”

The journal Science thought so. The work is published in the current issue.

The work was supported by Sandia’s Laboratory Directed Research and Development program.  Some work was performed at the Center for Integrated Nanotechnologies (CINT), a Department of Energy Office of Science User Facility operated by Los Alamos and Sandia national laboratories.