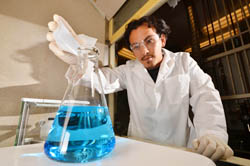 The research, published in Dalton Transactions, might lead to devices that can help economically and reliably incorporate large-scale intermittent renewable energy sources, like solar and wind, into the nation’s electric grid.

The grid was designed for steady power sources, making fluctuating electricity from intermittent renewable energy difficult to accommodate. Better energy storage techniques help even out the flow of such fluctuating sources, and Sandia researchers are studying new ways to develop a more flexible, cost-effective and reliable electric grid with improved energy storage.

For the past 20 years, lithium-ion batteries have been at the forefront of energy storage research. Their compact, lightweight design is well suited for cell phones, laptop computers and personal electronics, but lithium-ion batteries are expensive and degradation issues limit their use in stationary, high-capacity application on the nation’s electric grid.

Sandia researcher and inorganic chemist Travis Anderson is leading a team developing the next generation of flow batteries. A flow battery pumps a solution of free-floating charged metal ions, dissolved in an electrolyte — substance with free-floating ions that conducts electricity — from an external tank through an electrochemical cell to convert chemical energy into electricity. Flow batteries are rapidly charged and discharged by changing the charge state of the electrolyte, and the electroactive material can be easily re-used many times. Anderson said flow batteries can sustain more than 14,000 cycles in the lab, equivalent to more than 20 years of energy storage, which would be unusual in a lithium-ion battery.

However, flow battery grid storage systems are roughly the size of a house and can cost more than equivalent lithium-ion batteries. The goal of researchers is to make flow batteries smaller and cheaper, while increasing the amount of energy stored for a given volume, or energy density.

Flow batteries have been fielded in the U.S., Japan and Australia. A number of systems – up to 25 MW – are in the process of being demonstrated under the American Recovery and Reinvestment Act (ARRA) administered by DOE’s Energy Storage Systems Research program. Zinc bromine and vanadium redox systems are among the top contenders. But the materials involved are moderately toxic, and vanadium is subject to major price fluctuations.  In addition, the aqueous solution limits the amount of material that can be dissolved and how much energy can be stored, and outside temperature can hurt performance. 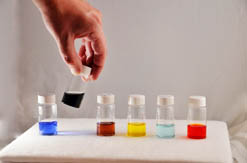 Sandia is pioneering research on flow batteries that avoid these problems by not using water. Anderson assembled a multidisciplinary team of experts from the Labs, including electrochemist David Ingersoll, organic chemist Chad Staiger and chemical technologists Harry Pratt and Jonathan Leonard. What they’ve designed is a new family of electrochemically reversible, metal-based ionic liquids, or MetILs, which are based on inexpensive, non-toxic materials that are readily available within the U.S., such as iron, copper and manganese.

“Instead of dissolving the salt into a solvent, our salt is a solvent,” Anderson said. “We’re able to get a much higher concentration of the active metal because we’re not limited by saturation. It’s actually in the formula. So we can cost-effectively triple our energy density, which drastically reduces the necessary size of the battery, just by the nature of the material.”

A common problem when mixing positively and negatively charged species is that these species will start aggregating together, eventually causing the solution to turn gummy and clog the battery membrane and electrode surfaces. The team addressed that challenge by developing asymmetric cations, or positively charged ions, that resemble a soccer ball. In this analogy, the black pentagons represent negatively charged areas and the white hexagons represent positively charged regions. Such an arrangement lowers the melting point by preventing the ionic liquid constituents from bonding and becoming a solid, while the partial charge still allows electrons to flow freely through the cell to generate a current.

The team is funded by the Department of Energy’s Office of Electricity Delivery and Energy Reliability. Imre Gyuk, energy storage systems program manager for that office, has been a champion of Sandia’s efforts and provided the necessary funding.

“The MetILs approach represents an ingenious, out-of-the-box solution to the cathode/electrolyte paradigm. Because it is based on readily available, inexpensive precursors, it may well lead to innovative, cost-effective storage systems with major impacts on the entire U.S. grid,” said Gyuk.

The findings apply to new flow battery cathode materials. The next step for the Sandia team is to find similar materials for flow battery anodes, and researchers are encouraged by their progress.

“There are three things you’re juggling at the same time, and they aren’t always related: viscosity, electrical conductivity and the fundamental electrochemical efficiency,” Anderson said. “The excitement of having all three things go right at the same time, it’s like finding the treasure, but without the map. We’re creating that map, and we’re very excited by the possibilities.”