ALBUQUERQUE, N.M. — When people are in the early stages of an undiagnosed disease, immediate tests that lead to treatment are the best first steps. But a blood draw — usually performed by a medical professional armed with an uncomfortably large needle — might not be quickest, least painful or most effective method, according to new research. 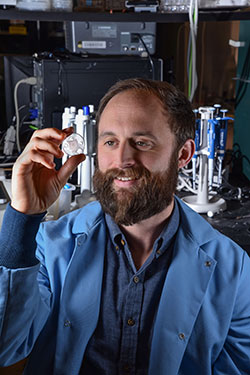 Sandia National Laboratories researcher Philip Miller examines a microneedle device. The new device design uses an array of needles and can extract 20 microliters of interstitial fluid, compared to the two microliters that the previous version of the device achieved. (Photo by Randy Montoya) Click on the thumbnail for a high-resolution image.

“We believe interstitial fluid has tremendous diagnostic potential, but there has been a problem with gathering sufficient quantities for clinical analysis,” said Polsky. “Dermal interstitial fluid, because of its important regulatory functions in the body, actually carries more immune cells than blood, so it might even predict the onset of some diseases more quickly than other methods.”

Polsky, along with the University of New Mexico, the U.S. Army Edgewood Chemical Biological Center and other Sandia researchers described the new technique in an Oct. 22 paper in the Nature journal, Communications Biology.

The relatively large quantities of pure interstitial fluid extracted, which have never before been achieved, make it possible to create a database of testable molecules, such as proteins, nucleotides, small molecules and other cell-to-cell signaling vesicles called exosomes. Their presence or absence in a patient’s interstitial fluid would then indicate, when an individual’s data is transmitted by electronic means to a future data center, whether bodily disorders like cancers, liver disease or other problems might be afoot.

The new microneedle extraction protocol achieved its latest results by modifying a technique described in a 1999 technical paper. The original technique drew fluid with a microneedle attached to a flat substrate penetrating the skin. In the recent modification, a concentric ring from a horizontally sliced insulin pen injector surrounding the needle was used serendipitously and a far greater amount of fluid became available.

“The earlier paper showed less than a microliter per insertion and our new needles were getting up to 2 microliters per needle, so we hypothesized the difference had to be the mounting around the needle modulating the pressure pressed on the skin,” said Sandia researcher Phillip Miller, the lead author on the paper. “By creating arrays of needles, our extractable amount increased from 2 microliters to up to 20 microliters in human subjects.” One microliter is about 0.000034 fluid ounces.

Interstitial fluid, the transparent fluid that surrounds all human cells, is most commonly experienced as the liquid that puffs up blisters. It is so important for the transport of biomolecules between cells and as an intermediary between blood and the lymphatic system that some researchers have referred to it, like skin, as another bodily organ.

Interstitial fluid’s advantage for patients is that it can be probed by 1.5-millimeter (approximately .06 inches) needles that are too short to reach nerves that cause pain. It also has no red blood cells to cloud the results of tests. Until this latest research, the fluid had only one difficulty: the inability of researchers to collect enough of it unspoiled by cell fragments to perform an adequate number of tests for complete characterization. A microneedle pressed into the skin would send up just the interstitial fluid it had displaced — a fraction of a microliter. Alternatively, inserting a tiny fluid pump brought forth large but damaged quantities of fluid.

Work over the last decade has used the needles in the laboratory to collect tiny amounts — fractions of microliters — of interstitial fluid to detect real-time changes in body salts that indicate fatigue. Researchers envisioned a wristwatch-sized device that gave instant electrolyte readouts to athletes and their coaches, military personnel in the field or ordinary citizens feeling a bit down.
That technique has proved of more than theoretical interest: Sandia Labs, with Polsky as lead investigator, has just signed a $1 million Cooperative Research and Development Agreement with an Australia-based company, Microfluidics Biomedical Pty. Ltd., to develop just such a watch that senses lactate and glucose in real-time. The watch is projected to be market-ready within three years. Polsky spoke about this concept in a TEDxABQ talk in September 2017.

The agreement is based upon the company’s interest in creating a real-time measurement device for sports enthusiasts, soldiers in the field and ordinary people interested in determining personal health issues immediately. The company’s expertise in algorithm development and Sandia’s expertise in microfabrication of autonomous integrated sensors and microneedle technology will join in the product’s development.

Various watch designs will be tested for sensitivity and selectivity, as well as for long-term use over relevant concentration ranges in a synthetic interstitial fluid and then in live subjects. Microfluidics Biomedical will design the wireless technology for transmitting the signal generated by the sensors, which can be read by coaches, military team leads or the person who owns the watch.

This research agreement is significant because it is a step in crossing what entrepreneurs call the “valley of death” that often separates laboratory innovation from realization as a commercial product.

But the research community investigating the medical use of microneedles wanted to examine bigger game, including detecting dreaded diseases more intrusive than a mere shortage of electrolytes.

More tests will be needed to collect data on those interstitial fluid components that mirror in kind, though not in quantity, many of those available for blood. Once achieved, the stage will be set for simpler, cheaper, faster, painless tests expected in the future to be transmitted electronically from a participant’s wrist watch to a central data bank, to determine in real-time the existence of a medical problem and its remedy at the earliest stage.

It will take many years to make a complete database for the world’s diseases, Polsky said. So currently, he and his team are starting a new project to look at biomarkers in interstitial fluid that evolve after flu vaccinations. The effort will use volunteer Sandia employees. “Flu vaccinations are an ideal way to study the pathogenesis of infectious diseases and this study can lead to a new way to diagnose influenza and characterize its spread,” said Polsky.