ALBUQUERQUE, N.M. — The lab is calm and quiet, clean and well organized; boxes of tiny needles and sample tubes are neatly stacked above a pristine paper-covered countertop.

This is a far cry from the hectic emergency room, dusty battlefield or sweaty training center Sandia National Laboratories and University of New Mexico researchers hope will soon host their microneedle-based sensors. 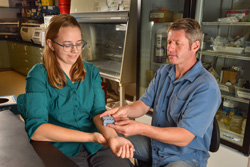 Sandia National Laboratories materials scientist Ronen Polsky positions a prototype 3-D-printed microneedle holder on the arm of Sandia science writer Mollie Rappe. Rappe participated in a clinical trial to see the best length of needle to extract the interstitial fluid on the path to track the physiological condition of soldiers. (Photo by Randy Montoya) Click on the thumbnail for a high-resolution image.

I am here, at this UNM lab, to participate in a research study to help these microneedles make that leap from basic research to helping soldiers on vital missions.

Ronen Polsky, a Sandia materials scientist who leads the design of the microneedle sensor, said the technology is the first way to extract large volumes of pure interstitial fluid for further study. In September, Polsky presented his vision and hopes for the microneedle-based sensor system at the Albuquerque TEDx conference.

Microneedles are a few hairsbreadths wide and can sip the clear fluid between cells in the middle layer of skin. This is below the topmost layer of dead skin cells and above the layer of skin where veins and nerves reside. The clear, colorless fluid is called interstitial fluid and is similar to blood plasma.

The microneedles can contain minuscule sensors or extract the interstitial fluid for further testing. Because microneedles are tiny and don’t go very deep, they’re practically painless. When five microneedles clasped in a 3-D printed holder were inserted into my forearm, I felt a little pain. It was less than a standard needle prick and faded quickly.

For the study I participated in, the needles were left in for 30 minutes and three lengths of needles were tested to determine the proper length to extract interstitial fluid from me.

Since the needles are painless and minimally invasive, they could be left in for hours or even a whole day without irritation, allowing constant monitoring, said Polsky.

Continual sampling of important biomarkers in this interstitial fluid could help monitor and diagnose many diseases and disorders. These markers include electrolytes, salts such as potassium and sodium that get out of balance during dehydration; glucose, a sugar that diabetics need to monitor constantly; and lactate, a potential marker of physical exhaustion or life-threatening sepsis.

A small, wearable sensor that can monitor these markers could have many uses. It could help endurance athletes meet their training goals without plunging into dehydration or severe exhaustion. Tracking their physiological conditions would aid soldiers on strenuous missions, alerting them before they get so exhausted it could compromise their objectives. Polsky said the microneedle sensor also could be part of a sense-and-respond device that detects high glucose levels and automatically delivers insulin.

“To move toward something that is market-ready, you need to start adding components that make it a bit more user-friendly and increase the reproducibility of the readouts,” said Philip Miller, a Sandia biomedical engineer also involved in designing the sensor.

Or the sensors could be used in emergency rooms and critical care facilities to determine which salts are out of balance in cases of severe dehydration or track the response of a septic patient to a course of antibiotics, said Dr. Justin Baca, assistant professor of emergency medicine at UNM who leads the human testing of the sensor.

“There are a lot of great uses for these microneedle sensors,” said Baca. “It has the ability to help a lot in the medical sphere and in national security, but it could also be something that’s useful to somebody who’s just trying to improve their performance as a cyclist.”

“Now we have a pretty good sense of what the average length we should use for most people, but some people’s skin is a little thicker or a little thinner in that area and the flow rate may be decreased,” said Baca. Typically the best microneedles are 1.5-millimeter long, or as long as a U.S. penny is thick. 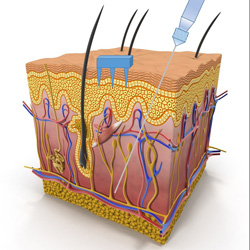 A study by Sandia National Laboratories and the University of New Mexico uses tiny microneedles that sip fluid in the middle layer of skin between the layer of dead skin cells and above where veins and nerves reside. Therefore, they’re far less painful than traditional hypodermic needles. (Sandia National Laboratories) Click on the thumbnail for a high-resolution image.

I’m pretty thick skinned, and this study proves it. The 2-millimeter long microneedles extracted more interstitial fluid from me than the 1.5- or 1-millimeter long needles.

In addition to the salts and sugars with well-studied roles in physiological monitoring, interstitial fluid contains many proteins and exosomes, free-floating balls carrying genetic information including cancer markers.

More research is needed to unravel everything these components can signal, but Polsky hopes someday interstitial fluid will join blood and urine as a fluid doctors routinely test for their clinical diagnoses. That’s the focus of the study I participated in.

After Robert Taylor, a postdoctoral fellow who works with Baca at UNM, cleaned my forearm with an alcohol wipe, he pressed the third five-needle holder into my arm. There was a brief jolt of pain and pressure similar to tugging on strands of hair. Then, except for the fact that I was asked not to move my hand and someone was pressing a finger-sized piece of plastic against my arm, I hardly noticed it. Future sensor systems will be set up to be simpler to use, said Taylor.

After about 10 minutes, I saw clear, water-like liquid seeping out of me, into tiny glass straw-like capillaries. In 30 minutes, the five microneedle-capillaries collected about 2 microliters, or 1/30 of a drop.

For many applications the researchers envision, the biomarker sensors would be on the very tip of the microneedle to allow continual detection of the conditions inside the body. Future studies will use larger needle arrays to increase sample volume. For other applications, such as early cancer detection, collecting the interstitial fluid may take longer than a standard blood draw, but could provide different clues.

In June, the researchers announced interest in business partners to help integrate the microneedle sensors into a self-contained device. The ultimate goal of commercialization or a partnership with industry would be to get technology to the market in a way that benefits the public.

The initial work on the sensor was funded by Sandia’s Laboratory Directed Research and Development program. The U.S. Defense Threat Reduction Agency is funding the human studies.

After four 30-minute interstitial fluid collections, my part is done. The red marks from the needle holder fade after a few hours but the satisfaction of helping science lasts much longer. Baca’s team will conduct various tests on my interstitial fluid, bringing them one step closer to microneedle-based sensors for patients, soldiers and athletes.