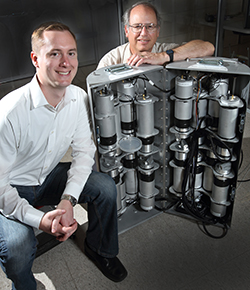 Sandia National Laboratories’ Mark Gerling, left, and John Goldsmith demonstrated the effectiveness of the mobile imager of neutrons for emergency responders (MINER) at an emergency response exercise. With omni-directional imaging, MINER quickly localized a sealed laboratory radiation source in a high-rise building in downtown Chicago. (Photo by Dino Vournas) Click on the thumbnail for a high-resolution image.

LIVERMORE, Calif. — A nuclear device has been hidden in a high-rise building in a major metropolitan area. Emergency responders have intelligence that narrows down the location to a single city block, but it isn’t safe to search door-to-door. Can they identify the exact location of the device quickly without the culprits realizing a search is on?

The answer is a definite yes. Sandia National Laboratories’ mobile imager of neutrons for emergency responders (MINER) system did just that at an emergency response exercise in downtown Chicago earlier this year. The exercise used a sealed laboratory radiation source that mimics the radioactive signature of more nefarious material.

“The system performed exactly as we expected,” said Sandia physicist John Goldsmith. “With an unshielded source, we pinpointed the location within 30 minutes. With more shielding, it took a couple of hours.”

MINER is a portable version of the neutron scatter camera, which detects fast neutrons that emanate from special nuclear material to pinpoint the source, even at significant distances and through shielding. Funding for the development came from the Defense Nuclear Nonproliferation Office of Research and Development within the Department of Energy’s National Nuclear Security Administration.

The original neutron scatter camera was quite large, standing about 5 feet tall and requiring a power source. MINER is about half that size at 3 feet tall and 90 pounds.

MINER consists of 16 proton-rich liquid scintillator cells arranged inside a large cylinder. The scatter aspect comes into play as neutrons travel through the scintillator cells and bounce off protons like billiard balls. Those interactions among the different detector cells enable the instrument to determine the direction of the radioactive source that emitted the neutrons.

As a neutron scatter camera, MINER has several advantages over other types of detectors, including the ability to discriminate the device signature from background radiation and to measure the spectrum of neutrons emitted by it.

“Simple neutron counters are unable to distinguish a threat source from an elevated neutron background. However, an imager such as MINER can do this by observing a ‘hot spot’ against the neutron background,” Goldsmith said. “In addition, MINER’s ability to measure the neutron spectrum enables it to distinguish plutonium, a threat source, from AmBe [americium-beryllium, the most common commercial source of neutrons], which is not a threat source. Among imaging approaches, this capability is unique to MINER.”

MINER can be set up and taken down in 10 minutes, and most importantly, operates on battery power. “Since MINER doesn’t need to be tethered to a power source, it gives a lot of options to emergency responders,” said Goldsmith.

The Chicago field exercise focused on neutron detectors, so MINER was one of three neutron imagers tested along with several neutron counters. It wasn’t a competition, explained Goldsmith, but a test of each detector’s capabilities.

“There are tradeoffs with every kind of detector. If you are trying to pinpoint a source, a backpack detector might be the fastest, but there are scenarios in which walking around isn’t possible,” he said.

One of MINER’s strengths is its ability to provide omni-directional imaging. “Other imaging detectors have a very fixed field of view, so they look at a specific spot,” said Sandia physicist Mark Gerling. “MINER images all the way around and up and down, or a full 4π steradians. We imaged part of one side of an entire high-rise building at once and narrowed the search to a specific room. It’s extremely effective in this situation.”

MINER also is a two-for-one detector. The system was designed for neutron imaging and spectroscopy, but its proton-rich liquid scintillators also can capture gamma rays. While not the most efficient or effective gamma ray detector, MINER’s design makes it suitable for several unusual applications.

“When used as a neutron scatter camera, MINER is closed. But if we open it up, we can position MINER near a radiation source and gather additional information about that source. This could be very useful in determining how to handle an object that is emitting radiation,” explained Goldsmith.

Future work on MINER includes expanding and refining its measurement capabilities and participating in a search scenario at sea.