The two successful tests, which were conducted this summer, provide data for the program, the W88 ALT 370 (alteration), to move forward, said Tim Edwards, manager for the program’s technical basis and qualification activities.

The Critical Radar Arming and Fuzing Test (CRAFT) was the first flight test of a prototype radar for the W88 ALT 370. CRAFT demonstrated how the radar performed during re-entry through plasma generated by the hypersonic speeds at which the warhead travels. 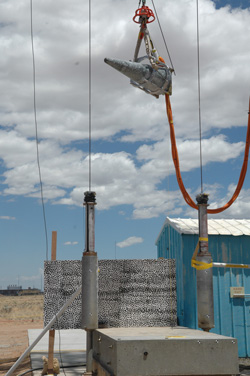 Sandia National Laboratories performed a drop test for the W88 ALT 370 program, designed to replicate a crane accidentally dropping the re-entry body onto a concrete surface. The test was conducted at Sandia’s 185-foot Drop Tower Facility, using the same handling gear a crane would use to move the weapon. (Sandia National Laboratories) Click on the thumbnail for a high-resolution image

The new radar functioned as expected after launch on a Trident II missile from a Navy submarine, Edwards said. Sandia and its partners are analyzing results to validate requirements and radar design.

The June CRAFT test was the first of several planned flight tests to demonstrate the upgraded system’s performance. It also represented a milestone: the first flight test unit Sandia and its partners, Los Alamos National Laboratory (LANL), the Kansas City Plant (KCP) and Pantex, delivered to the Navy for full-scale testing under the program.

A month later, the first drop test of the W88 ALT 370 program mimicked a crane accidentally dropping the re-entry body onto a concrete surface to develop evidence that it would remain safe during an accident. Using an unarmed re-entry body, Sandia conducted the test in partnership with LANL, KCP and Pantex at Sandia’s 185-foot Drop Tower Facility, using the same handling gear a crane would use to move the weapon, making the test as realistic as possible.

It was the W88 program’s first abnormal drop test since the system’s original qualification test in 1987. An abnormal environment is one that is unexpected, such as an accident.

“The weapon is not required to function after that, just to stay safe,” Edwards said.

Sandia will use vibration and shock measurements from the test to update specifications for components in the weapon, he said. It also will use the information to validate computer models designed to apply the results to other drop scenarios, since it’s not possible to replicate every possible accident in tests.