LIVERMORE, Calif. — Mobile lighting systems powered by hydrogen fuel cells are cleaner, quieter and now have a proven track record in applications such as nighttime construction, sports and entertainment events and airport operations, making them ready for commercialization and broader use.

That’s the conclusion reached by researchers at Sandia National Laboratories and others after a multiyear project sponsored by the Department of Energy’s Fuel Cell Technologies Office and the Boeing Co. Project support also came from the California Department of Transportation (Caltrans), Altergy Systems and 11 other project partners. 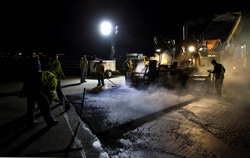 Developed by Sandia National Laboratories and several industry partners, the fuel cell mobile light offers a cleaner, quieter alternative to diesel-powered units. As seen here (top center), the system has been used by airport construction personnel at San Francisco International Airport and in other applications. (Photo by Dino Vournas) Click on the thumbnail for a high-resolution image.

Over the past five years, Sandia and 14 institutional partners have been developing the fuel cell mobile light tower (H2LT) as a clean, efficient alternative to traditional lights powered by diesel generators.

Airport equipment and maintenance personnel at San Francisco International Airport and Saunders Electric crews at various Hollywood-area entertainment and awards shows, including the Academy Awards, have already realized the benefits of the clean and efficient H2LT as part of their regular operations. Other systems have been used by highway construction crews at Caltrans and the Connecticut Department of Transportation. One system was even deployed at NASA’s Kennedy Space Center to support the final space shuttle launch in 2011.

Market transformation and other successes

The goals of the pilot programs were to perform a variety of lighting tasks, assess the operation and reliability of the technology in a variety of potentially corrosive environments, reduce diesel emissions at deployment locations and help promote hydrogen fuel cell technology in new markets. The project has been deemed a major success in opening up new fuel cell markets that complement broader hydrogen energy markets, including the light-duty vehicle market, said Sandia project lead Lennie Klebanoff. Toyota Motor Corp., General Motors Co., Honda and Hyundai have all announced plans for hydrogen-powered vehicles.

“Since San Francisco International Airport and Saunders Electric are now using H2LTs as part of their regular operations, it is stimulating the demand for hydrogen in those regions and helping to create markets for its production and sale,” he said.

A key educational component emerged during the project as well, said Klebanoff.

“Wherever the H2LT was used or displayed, we engaged with local fire and building safety authorities and first responders, few of whom had prior knowledge of the physical or safety aspects of hydrogen and fuel cell technology,” he said. “After hearing our technology descriptions and seeing the different ways the H2LT was being used, those groups rapidly welcomed the technology as both reliable and safe.” 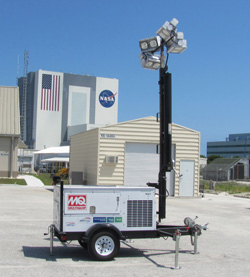 The H2LT developed by Sandia National Laboratories and its partners was deployed in 2011 at the site of the final space shuttle launch and observed by visitors, shuttle astronauts and members of the international media. (Photo by Lennie Klebanoff) Click on the thumbnail for a high-resolution image.

Emissions-free, but quiet and tough

In addition to zero emissions, perhaps the most attractive feature of the fuel cell mobile light system is how quiet it is.

“The primary driver of the project from the outset was the lowering of greenhouse gas emissions, and, in fact, the H2LT system was not designed to minimize noise,” said Klebanoff. “Still, hydrogen fuel cell technology by its very nature is dramatically quieter than diesel generators, and this noise reduction is something that really excites users,” said Klebanoff.

The lack of noise, he said, is highly valued by highway construction crews, airport maintenance personnel and stage crews on entertainment production sets. Users would rather not deal with the odors and noise of diesel-based equipment.

Another important conclusion that was reached was that the fuel cell power system manufactured by project partner Altergy Systems is compatible with the rugged world of construction. Caltrans used one unit in rain, wind and snow in the Sierra Nevada range. The elements — and towing the lights about 1,100 miles up and down bumpy mountain roads — proved to be no problem for the robust fuel cell mobile lighting technology.

Lighting the way ahead

The price tag for a prototype fuel cell-powered mobile lighting system initially was roughly triple that of a traditional diesel-powered system.

Cost-cutting strategies Multiquip is considering include incorporating highly efficient light-emitting diodes (LED), which will allow a reduction in fuel cell size; reducing the size of the hydrogen storage tanks; and decreasing the required tank pressure rating. The cost of the current LED technology used with the system also is expected to decline.

“We had great customer feedback and interaction from these prototype units and most importantly all deployment has proven the dependability of fuel cells in the rough environment of the construction industry,” said Torsten Erbel, vice president for Product Management, Engineering and Customer Support for Multiquip Inc. “With this knowledge and the deployment of fuel cell powered vehicles, the hydrogen infrastructure will quickly develop to support our commercial plans for the fuel cell mobile light, allowing us to bring the environmental benefits of hydrogen to the construction business.”

“Overall, end users have been pleased with the performance of the hydrogen fuel cell mobile lighting system,” said Klebanoff. “We’re confident that the technology can now be commercialized and widely used in any application needing large-area lighting.”

Sandia has decades of experience in hydrogen and fuel cells systems and leads a number of other hydrogen research efforts, including the Hydrogen Fueling Infrastructure Research and Station Technology (H2FIRST) project, a maritime fuel cell demonstration, a development project focused on hydrogen-powered forklifts and a recent study of California gas stations that can safely store and dispense hydrogen.