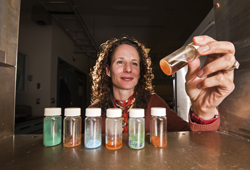 Sandia chemist Tina Nenoff heads a team of researchers focused on removal of radioactive iodine from spent nuclear fuel. They identified a metal-organic framework that captures and holds the volatile gas, a discovery that could be used for nuclear fuel reprocessing and other applications. (Photo by Randy Montoya) Click on the thumbnail for a high-resolution image.

The Sandia researchers have used metal-organic frameworks (MOFs) to capture and remove volatile radioactive gas from spent nuclear fuel. “This is one of the first attempts to use a MOF for iodine capture,” said chemist Tina Nenoff of Sandia’s Surface and Interface Sciences Department.

The discovery could be applied to nuclear fuel reprocessing or to clean up nuclear reactor accidents. A characteristic of nuclear energy is that used fuel can be reprocessed to recover fissile materials and provide fresh fuel for nuclear power plants. Countries such as France, Russia and India are reprocessing spent fuel.

The process also reduces the volume of high-level wastes, a key concern of the Sandia researchers. “The goal is to find a methodology for highly selective separations that result in less waste being interred,” Nenoff said.

Part of the challenge of reprocessing is to separate and isolate radioactive components that can’t be burned as fuel. The Sandia team focused on removing iodine, whose isotopes have a half-life of 16 million years, from spent fuel.

“Silver attracts iodine to form silver iodide,” Nenoff said. “The zeolite holds the silver in its pores and then reacts with iodine to trap silver iodide.”

But silver is expensive and poses environmental problems, so the team set out to engineer materials without silver that would work like zeolites but have higher capacity for the gas molecules. They explored why and how zeolite absorbs iodine, and used the critical components discovered to find the best MOF, named ZIF-8.

“We investigated the structural properties on how they work and translated that into new and improved materials,” Nenoff said.

MOFs are crystalline, porous materials in which a metal center is bound to organic molecules by mild self-assembly chemical synthesis. The choice of metal and organic result in a very specific final framework.

The trick was to find a MOF highly selective for iodine. The Sandia researchers took the best elements of the zeolite Mordenite — its pores, high surface area, stability and chemical absorption — and identified a MOF that can separate one molecule, in this case iodine, from a stream of molecules. The MOF and pore-trapped iodine gas can then be incorporated into glass waste for long-term storage. 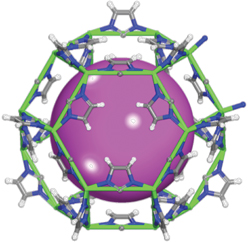 This illustration of a metal-organic framework, or MOF, shows the metal center bound to organic molecules. Each MOF has a specific framework determined by the choice of metal and organic. Sandia chemists identified a MOF whose pore size and high surface area can separate and trap radioactive iodine molecules from a stream of spent nuclear fuel. (Image courtesy of Sandia National Laboratories) Click on the thumbnail for a high-resolution image.

The Sandia team also fabricated MOFs, made of commercially available products, into durable pellets. The as-made MOF is a white powder with a tendency to blow around. The pellets provide a stable form to use without loss of surface area, Nenoff said.

Sandia has applied for a patent on the pellet technology, which could have commercial applications.

The Sandia researchers are part of the Off-Gas Sigma Team, which is led by Oak Ridge National Laboratory and studies waste-form capture of volatile gasses associated with nuclear fuel reprocessing. Other team members — Pacific Northwest, Argonne and Idaho national laboratories — are studying other volatile gases such as krypton, tritium and carbon.

The project began six years ago and the Sigma Team was formalized in 2009. It is funded by the U.S. Department of Energy Office of Nuclear Energy.

“The most important thing we did was introduce a new class of materials to nuclear waste remediation,” said Sava, postdoctoral appointee on the project.

Nenoff said another recent paper in Industrial & Engineering Chemistry Research shows a one-step process that incorporates MOFs with iodine in a low-temperature, glass waste form. “We have a volatile off-gas capture using a MOF and we have a durable waste form,” Nenoff said.

Nenoff and her colleagues are continuing their research into new and optimized MOFs for enhanced volatile gas separation and capture.