ALBUQUERQUE, N.M. — Each day during National Nuclear Science Week, Jan. 23-27, some 250 middle school and high school students will pack the National Museum of Nuclear Science & History for hands-on activities that span the breadth of the nuclear world.

They will work on everything from atomic modeling and chain reactions to workshops on radiation and basic energy programming, with a different topic each day, said museum Director Jim Walther. Local chapters of the American Nuclear Society (ANS) and North American Young Generation in Nuclear (NA-YGN) will help museum staff and volunteers with the presentations.

This year’s 3rdannual National Nuclear Science Week continues the theme of “Get to Know Nuclear,” aimed at promoting careers in nuclear and other sciences, technology, engineering and math. The celebration will include webinars broadcast live on Nuclear Science Day, Jan. 25, from the Illinois Institute of Technology in Chicago.

The National Museum of Nuclear Science & History, a Smithsonian affiliate, sponsors the week and is largely responsible for creating it.

The designated week, the fourth week in January, came about because museum staff and corporate partners wanted a way for educational institutions and the industry to be able to talk broadly about nuclear energy, Walther said.

“So it became a little bit of our advocacy role,” he said.

The museum, chartered by Congress, is one of only a few national museums outside Washington, D.C. Due to its location, “we have to have a national footprint, and this is part of a way to do it,” Walther said.

The week quickly became a national effort as many partners in the nuclear industry embraced it as filling a need and promoted it, he said.

Each year the celebration centers around a different location, and the location that was host the previous year marks the week with events the next year. In that way, Walther said, the celebration has grown remarkably in its short lifetime.

“It’s kind of viral on a personal level because people get excited about doing something,” he said.

This year, the museum has partnerships with the National Science Teachers Association and the Illinois Institute of Technology, which is hosting the webinars, said Jeanette Miller, museum marketing director. Other Nuclear Science Day sponsors are the ANS, the Nuclear Energy Institute (NEI), the Society of Nuclear Medicine (SNM), Exelon Corporation and Entergy. Students and teachers nationwide will log in that day to listen and ask questions. Walther and Miller will be in Chicago for the webinars, then will return to Albuquerque to help with the student workshops here.

Elsewhere, schools and colleges plan presentations, some channeled through ANS chapters; congressional staffers in Washington will be briefed on nuclear science, nuclear power and jobs; and such U.S. Department of Energy sites as Savannah River in South Carolina, Idaho National Laboratory and Argonne will hold events.

Teachers and others can download free curriculum and information at www.NuclearScienceWeek.org. The site includes suggested lesson plans and classroom presentations.

“If an eighth-grade classroom is talking about radiation, there’s an activity for them,” Walther said. 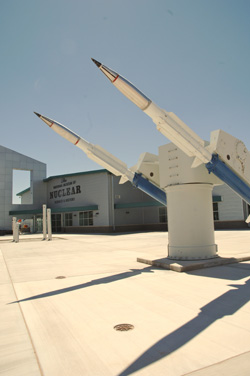 National Nuclear Science Week is meant for the general public, but he said the way to reach adults is to reach children.

“That’s how you do it. You hook the family, you hook the kids, you get the moms and dads that way, and you begin the broader conversation about nuclear power or nuclear medicine or whatever,” he said.

The nuclear world is everywhere, from nuclear medicine in local hospitals to nuclear industry manufacturing plants to towns that have nuclear power or, in the case of communities like Albuquerque, that have national laboratories and many people working in the industry.

The museum’s national steering committee set five subject areas before the first celebration in 2010, and this is how they break down by day this year: Monday, education about all things nuclear; Tuesday, careers; Wednesday, nuclear energy generation; Thursday, nuclear safety; and Friday, nuclear medicine.

Focusing on careers is important in an era of increasing emphasis on creating jobs, Walther and Miller said. But Walther said it’s also important to the museum because “we’re interested in preparing young people to be technically capable of being employees someday. We don’t care if they work for the labs or wherever, but we want them to be better prepared for the world they’ll face when they get there.” Miller added: “And scientifically literate and proficient just in order to be better prepared all around.”

Supporters of National Nuclear Science Week wanted to talk about safety because “that ends up being one of the things the adult population cares about when it comes to nuclear: ‘Is it safe, how safe is it?’” Walther said.

Nuclear medicine was a natural topic because it’s a huge part of modern health care. In the United States alone, Walther said, nuclear medicine is used to diagnose or treat 55,000 people every day.

Many partners promoting events also advocate for nuclear energy to contribute a larger part of the nation’s electricity, so more discussion of those issues is needed, Walther said.

In addition, the designated week provides a platform “for breaking down a little bit of the fear factor that goes with ‘nuclear,’” Miller said.

“If people don’t have a strong science background, this is a way to sort of say, ‘OK, let’s take this step by step.’ There are ways to learn about nuclear; it doesn’t have to be an overwhelming, scary topic,” she said.