Motivating business to design a more resilient nation, one building at a time

ALBUQUERQUE, N.M. — Anyone who’s ever come home from vacation to find a home partly destroyed by a leaking roof, broken water line or backed-up sewage knows the horror of drywall replacement, rotted rugs, mold tests and other measures of reconstruction that force domestic life to a halt. 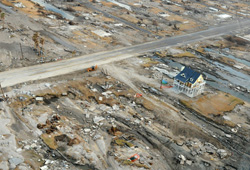 A little engineering goes a long way: A home in Gilchrist, Texas, designed to resist flood waters survived Hurricane Ike in 2008. (Photo courtesy of FEMA/Joselyne Augustino) Click on the photo for a high-resolution image.

The crisis is even greater when a commercial or government workplace is struck by disaster. Employees usually vacate the premises or wait passively for help. Little gets done.

But imagine a building resilient enough to allow people to continue their daily tasks even while an emergency is in progress. The self-reliant building might have its own small electrical generating system to maintain lights, computers and mobile communications during a power outage, compartmentalized clusters of rooms to prevent water damage in one sector from affecting others, shatterproof windows to minimize hazards from imploding glass and sufficient electronics to quickly pinpoint a trouble spot.

For obvious reasons, increased resilience for buildings in the face of hurricanes, earthquakes, terrorism or cyberattacks has been a major national security focus over the past decade.

Such resilient buildings not only would be less susceptible to damage and work interruption but could become community gathering places in a general crisis, according to a recently published Sandia paper, “Resilience certification for commercial buildings: a study of stakeholder perspectives,” published in Environment Systems and Decisions.

But it won’t be easy to secure voluntary adoption by industry and builders without adequate justification, explains Sandia researcher and lead author Barbara Jennings in the technical paper.

Expecting industry to act, for example, merely because “it’s the right thing to do” came out lowest (3 votes on a 1-to-10 scale) in a questionnaire presented to 15 industry representatives.

The highest number of respondents were motivated by economics. Their justifications included increased revenue (10 votes), better competitive edge (9) and quicker, cheaper recoveries (9) from more efficiently handling a disruption. Several others cited “decreased insurance premiums” (8) and “tax incentives” (7), while fewer respondents pointed to less obvious benefits: “Increased chance of receiving financing or lower finance rates” and “ability to charge higher lease rates due to increased attractiveness of the building to tenants” (both 5).

While the respondents generally liked the resilience concept, they found it daunting to plow through the government forms necessary to apply for sizable tax credits to offset increased building costs.

The paper proposes five concepts to help the concept of resilient buildings appeal to the construction, design and insurance communities, and to building owners.

Most imaginatively, the authors suggest that program sponsors collect stories and images that demonstrate resilience during alarming times and use these proxy incidents to motivate others who have yet to experience disasters themselves.

The Department of Homeland Security’s Office of Policy funded the work.