Unit will lead destruction of munitions at the U.S. Army Pueblo Chemical Depot 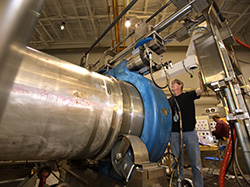 Sandia National Laboratories technologist Tom Raber recently prepared the EDS explosive containment vessel for shipment to the U.S. Army Pueblo Chemical Depot. Over the next five years, two EDS units are expected to process more than 1,000 chemical munitions as part of a larger cleanup operation at the Pueblo, Colorado, facility. (Photo courtesy of Sandia National Laboratories) Click on the thumbnail for a high-resolution image.

The project to destroy 560 chemical munitions at the U.S. Army Pueblo Chemical Depot in Colorado with EDS is a prelude to a much larger operation to destroy the stockpile of 780,000 munitions containing 2,600 tons of mustard agent, stored at the Pueblo depot since the 1950s.

The bulk of those munitions will be safely destroyed in the Pueblo Chemical Agent-Destruction Pilot Plant , which will begin operation later this year. The munitions to be destroyed in EDS are considered unsuited for processing by the plant’s automated equipment because they have leaked or have been sampled in the past.

“EDS was originally designed for nonstockpile chemical munitions at recovery sites, many of which are deformed and corroded,” explained mechanical engineer Brent Haroldsen, Sandia project lead. “Stockpile munitions are generally in better shape, but there are always a few that are leaking or damaged. That’s where EDS will come in to keep the plant moving efficiently.”

The Program Executive Office, Assembled Chemical Weapons Alternatives (PEO ACWA) is overseeing the pilot plant as well as the Blue Grass Chemical Agent-Destruction Pilot Plant near Richmond, Kentucky. Once the pilot plant begins operation, the EDS systems will remain at the site to process any additional reject munitions unsuitable for processing in the Pueblo pilot plant.

The two EDS units that will augment the pilot plant operation work much faster than the original EDS, which took two days to process a single munition. Sandia designed that system for the Army in the late 1990s to destroy munitions that were discovered unexpectedly.

To safely destroy a few damaged munitions at a time, possibly in populated areas, the original design emphasized transportability, flexibility, redundancy, surety of destruction and simplicity of manual operation — not rapid processing.

The Army first used EDS in 2001 at Rocky Mountain Arsenal in Colorado and then at other locations where abandoned munitions were recovered. Sandia then created a larger version, capable of destroying multiple munitions simultaneously and handling munitions with a higher explosive charge. In 2010, Sandia engineers created the Phase 2 Pilot (P2P), which decreased the processing time from two days to one through changes to the heating and cooling system and door clamp design.

Over the years, the basic operation of EDS has remained the same. At its core is a leak-tight vessel in which munitions are placed. An explosive shaped charge opens the metal shell, exposing the chemical agent and burster, a small explosive that disperses the agent. The burster explodes or deflagrates safely inside the vessel. A reagent is then pumped into the chamber to neutralize the chemical agent. The chamber is heated and turned to mix the chemicals and speed the reaction.

The new EDS, called the Phase Two Retrofit (P2R), incorporates many of the P2P improvements along with a separate boiler/chiller container and larger pipes and pumps to transfer fluids more quickly. Working with stockpile munitions also simplifies the explosion process.

“Nonstockpile munitions are discovered in strange conditions, tangled in tree roots or covered with barnacles. Badly corroded munitions are often stabilized with plaster of Paris and then wrapped in plastic before processing. Consequently, the EDS was designed to be adaptable and flexible,” explained Haroldsen.

But stockpile munitions, even problematic ones, are quite uniform. “So we need less flexibility in the design and we can use the shaped-charge explosives more effectively to cut the munitions,” said Haroldsen.

Improvements under way to vapor monitoring

In collaboration with Defiant Technologies, the EDS team also is working on an in-situ vapor monitoring system, which is an offshoot of Sandia’s MicroChemLab gas phase system. To ensure the EDS vessel is safe to open following operation, a vapor sample must be collected and analyzed. An in-situ monitoring system would draw a sample from inside the vessel, eliminating the collection step and saving about 45 minutes.

The vapor monitoring system also can monitor for multiple agents simultaneously, so it could be used to monitor the environmental enclosure around EDS or at a munition recovery site. That monitoring is currently being done with specialized gas chromatographs, which are reliable but can only check for one agent at a time.

“The ability to monitor for multiple agents with a single system would further simplify operations,” said Haroldsen.

The two EDS units will spend several years at PCAPP. Meanwhile, the Army continues to use the EDS system to destroy recovered chemical munitions.