ALBUQUERQUE, N.M. — National Technology and Engineering Solutions of Sandia, on behalf of Sandia National Laboratories, recently gave more than $538,000 in grants that focus on families and education as part of its corporate contributions program. 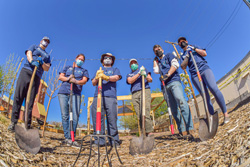 Sandia National Laboratories employees spend a Saturday this spring preparing the urban garden at Rio Grande Food Project in Albuquerque for spring planting. The garden will soon be home to tomatoes, green beans and bell peppers that will be distributed to clients. (Photo by Randy Montoya). Click on the thumbnail for a high-resolution image.

Efforts to improve family stability include helping people who are experiencing food insecurity and addressing the underlying causes of poverty, while educational success programs support the academic achievement of underserved K-12 students.

One such service organization is the Rio Grande Food Project on Albuquerque’s West Side.

“We have been a very fortunate recipient of Sandia grants since 2018,” said Ari Herring, the executive director. “(Sandia has) invested $90,000 in our hunger relief work over the last few years.”

Sandia’s grant money has helped to purchase food and fund fuel and maintenance for the refrigerated food rescue trucks the project uses to pick up food from local grocery stores. The grants also provide a salary for essential operations staff who coordinate volunteers and manage the sourcing, intake, storage and distribution of more than 80,000 pounds of food every month. 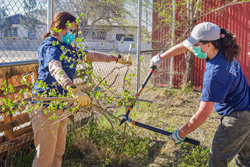 Sandia National Laboratories employee Tracy Flynn, left, and volunteer Marlene Vega trim branches at the Rio Grande Food Project’s urban garden in Albuquerque as part of National Volunteer Month in April. “I’m blessed to have the time and opportunity to serve,” said Flynn. “The garden lets people get back to nature and provides healthy food options for those in need. Digging in the dirt is cool too.” (Photo by Randy Montoya) Click on the thumbnail for a high-resolution image.

“Each week, this food pantry is helping 950 kids, adults and seniors with a week’s worth of food, and Sandia has been essential in helping us do the work we do,” said Herring. “I really believe that food is a human right, and I’m bothered that so many people don’t have access to or cannot afford the food they need to live a healthy life. The people we serve are like family, and a third of the people who get food here are kids. It’s unacceptable that kids skip meals.”

Her project works not only to distribute food to the community but also to connect people to the resources they need, such as utility bill assistance and nutrition education. Healthy recipes are distributed with the food clients receive.

They also operate an urban garden where community members harvest fruits and vegetables, such as spinach, beets, kale, tomatoes, asparagus, strawberries and grapes for immediate distribution to households in need.

The garden provides an educational space as well, where volunteers share the health benefits of eating fresh produce.

Sandia employees volunteered this spring to prepare the garden for the season. The compost pit was moved, soil was turned over and trees were trimmed.

“This garden provides extra food and it’s also a gathering space where people get to meet with others and help the garden thrive,” said Herring. “Sandia has helped move our urban project from a side project to a central part of our work that provides fresh fruit and vegetables for the low-income households we serve.” 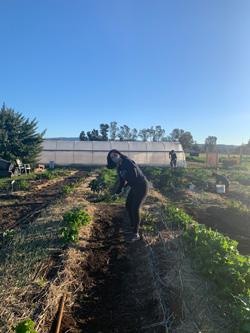 At Sandia’s site in Livermore, California, Fertile Groundworks, a nonprofit garden, receives funding from Sandia to help with growing and harvesting locally grown produce for community kitchens and food pantries in the area.

They also teach community members how to improve their health and well-being by growing food for themselves and others. More than 95% of the produce grown there is donated to people experiencing food insecurity.

Fertile Groundworks also provides education and support to local schools, corporations and other community groups to help them create and sustainably operate their own gardens.

Sandia’s corporate contributions coordinator Roberta Rivera said, “We always receive a great number of grant applications, but the pandemic has certainly increased the number of applications as more and more nonprofits seek out funders to help them continue their critical work.”

Sandia will fund additional agencies as grants totaling more than $500,000 are distributed this summer. Find out about Sandia’s corporate contributions program here.