ALBUQUERQUE, N.M. — Companies that want to supply products and services to Sandia National Laboratories have a new way to learn the ropes. Sandia now is offering open houses where small and diverse suppliers can talk to staff and contracting experts about doing business with the labs. 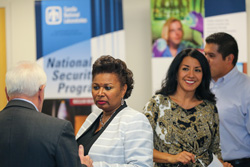 The first open house was Oct. 4, and more than 70 companies have attended seven sessions.

“It’s been great to open our doors to the community, to give people the opportunity of face-to-face engagement,” said Del Salazar, manager of Sandia’s Small Business Program and supplier diversity department. “Being able to speak to someone instead of just sending off an email is important. We’ve had an exceptionally positive response.”

Eric Lochausen said the open houses are a response to the many phone calls and emails he and Sandia’s other supplier diversity advocates receive every day. “People want to meet with us, and we thought it would be best to set up specific hours where we can devote our attention to small, diverse suppliers,” he said.

The open houses are offered three times a month: on the first Tuesday from 9-11 a.m.; second Wednesday from 1-3 p.m.; and third Thursday from 2-4 p.m., through March 2017. “People have options depending on their schedules,” Lochausen said. Times can be confirmed by emailing supplier@sandia.gov.

Advice for those who aren’t ready 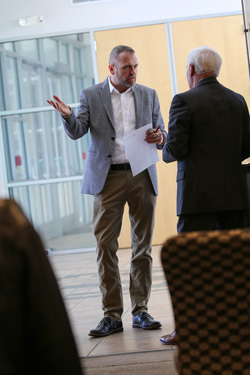 Sandia National Laboratories small-business advocate Eric Lochausen talks to a potential supplier at a recent open house. “People want to meet with us, and we thought it would be best to set up specific hours where we can devote our attention to small, diverse suppliers,” he said. (Photo by Lonnie Anderson) Click on the thumbnail for a high-resolution image.

The open houses are held in the Supplier Diversity Lobby of Sandia’s Innovation Parkway Office Complex at 1611 Innovation Parkway SE. The first invitations went to the Procurement Technical Assistance Program (PTAP) and Procurement Technical Assistance Centers (PTAC), which are government organizations that help small businesses with federal contracting; the Small Business Administration (SBA); the Veterans’ Business Outreach Center; the New Mexico Manufacturing Extension Partnership; and other business groups to share with their networks.

PTAP, PTAC and the SBA took it a step further and agreed to attend the open houses to advise people who might not be ready to do business with Sandia. “Having them there has been critical,” Salazar said. “Sometimes companies come in and are not yet in a position to work with the labs. We can say, ‘Here’s a resource that can help you get there.’ PTAP, PTAC and the SBA can help them get SAMS [System for Award Management] registrations, D-U-N-S [Dun & Bradstreet] numbers and help with proposals. They help them navigate the system and grow their businesses to the point that they can do government procurement.”

Lochausen, Sandia’s small business advocate for veteran- and service-disabled-veteran-owned companies, is joined by Marie Myszkier, who advocates for small disadvantaged, 8(a) and HUBZone businesses along with Alaskan Native Corporations and Indian Tribes; Patricia Brown, who advocates for women- and economically disadvantaged women-owned businesses; and Leo Valencia, a supplier point of contact.

Small business advocates work in the community and within Sandia to promote qualified suppliers from the various socioeconomic groups. At the open houses they collect information from attendees such as their North American Industry Classification System codes, quality certifications, safety records and employee clearances, and talk to them about how best to work with Sandia.

Qualified companies are added to Sandia’s Supplier Diversity database and can be introduced at matchmaking events so labs technical staff become aware of capable small businesses. Companies that lack some qualifications are referred to PTAP, PTAC and SBA. “They are passionate about helping suppliers,” Lochausen said.

A variety of procurement resources

Companies of all sizes are welcome at the open houses. “Our group targets small business but any supplier can come by,” Lochausen said. “We don’t turn anyone away.” Sandia buyers are included for networking and guidance.

Maria Guy of Armatus Consulting in Albuquerque, a small, woman-owned business that offers leadership development and training, said the open house she attended was valuable. “It was extremely informative and struck the right balance between formal and informal,” she said. “I sat down with people and asked questions and, as we got to know each other, they recommended follow-up contacts and resources and gave overall guidance in navigating doing business with Sandia. It’s a helpful service.”

Lochausen recommends that potential suppliers get familiar with www.sandia.gov, under the “Working With Sandia” webpage, to understand what Sandia buys and how, and to determine if Sandia is the right market for them. He also pointed companies to the following procurement resources:

“It takes a lot of preparation and time to do business with the government and its prime contractors,” Lochausen said. “You want to be as well prepared as possible and ready to sell your capabilities, experience, technical expertise, business acumen and financial strength.”

Salazar said Sandia wants small businesses to be successful, and that meeting face-to-face starts a relationship on sound footing. “This is what people have been waiting for, to sit down with someone from Sandia,” she said. “They learn how to do business with us and we learn more about them so we can build our database of interested, capable, qualified suppliers. These are people we’ve met and know something about.”

Lochausen said he expects the open houses to increase the number of small businesses Sandia contracts with. “We have momentum and want to keep it,” he said. “If you’re ready to do government contracting, come talk to us.”