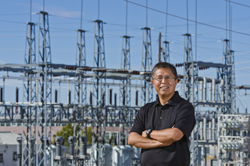 Sandia researcher Stan Atcitty was recognized for advances in power electronics. (Photo by Randy Montoya) Click on the thumbnail for a high-resolution image.

Sandia researchers Stan Atcitty and Dan Sinars have been named by President Barack Obama as recipients of the Presidential Early Career Award for Scientists and Engineers (PECASE). This is the highest honor bestowed by the US government on outstanding scientists and engineers who are early in their independent research careers.

Stan and Dan are among 96 researchers — including 13 from DOE laboratories — from 11 federal agencies named PECASE recipients this year. DOE program offices fund the work by the DOE recipients.

In making this year’s announcement, President Obama said, “Discoveries in science and technology not only strengthen our economy, they inspire us as a people. The impressive accomplishments of today’s awardees so early in their careers promise even greater advances in the years ahead.”

Energy Secretary Steven Chu offered his congratulations to DOE’s recipients, encouraging them “to continue on their paths to becoming the next generation of innovators, who will help America stay competitive in a rapidly advancing world. Their cutting-edge research is helping to meet our energy challenges, strengthen our national security and enhance our economic competitiveness.”

In addition to a citation and a plaque, each PECASE winner is continuing to receive Department funding for up to five years to advance his or her research.

Sandia Labs director Paul Hommert said, “I congratulate Stan Atcitty and Dan Sinars for this prestigious award. I’m sure everyone at Sandia shares my pride in their accomplishments. Their recognition, along with that of colleagues from throughout the DOE enterprise, is testimony to the quality of research in DOE’s national laboratories.”

Stan was nominated for the PECASE award by DOE’s Office of Electricity Delivery and Energy Reliability. He was recognized “for advances in power electronics for the electric grid including the development of a high-temperature silicon-carbide power module and an ultra-high-voltage silicon-carbide thyristor, for research on grid integration of energy storage, and for mentorship in the Native American community.”

Stan’s work on the high-temperature silicon-carbide power module and on the high-voltage silicon carbide thyristor was honored with prestigious R&D 100 awards in 2009 and 2011, respectively. The semiconductor device allows the next-generation “smart grid” power electronics system to be up to 10 times smaller and lighter than current silicon-based technologies. 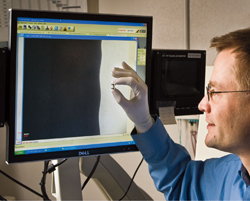 Dan Sinars was recognized for developing innovative techniques to study the properties of instabilities in magnetized-high-energy-density plasma. (Photo by Randy Montoya) Click on the thumbnail for a high-resolution image.

Dan was nominated by DOE’s Office of Science “for developing innovative techniques to study the properties of instabilities in magnetized-high-energy-density plasma, enabling quantifiable comparison between experiment and simulation needed for validating cutting-edge radiation-hydrodynamics codes, and for demonstrating substantial leadership qualities in high-energy-density-laboratory-plasma physics.”

In 2011, Dan was awarded a DOE Office of Science Early Career Research Program award of $2.5 million over a five-year period for measuring fundamental instabilities in magnetically driven Z-pinch explosions.

Dan’s team was the first to capture, in a series of images separated by nanoseconds, the undesirable but apparently unavoidable appearance of a damaging instability (called Magneto-Rayleigh-Taylor, or MRT) in Z-pinch magnetic fields, otherwise known to create conditions that fuse atoms for possible electrical energy generation.

Steve Rottler, Sandia’s Chief Technology Officer, said, “I want to congratulate Stan and Dan on behalf of their many Sandia colleagues. The body of work for which each is being recognized represents an important contribution to the mission of our Laboratories and an advancement at the frontiers of science and engineering.”

The awards will be presented at a White House ceremony on July 31.