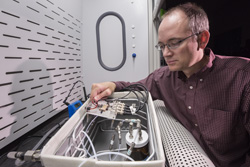 Sandia National Laboratories researcher Chris Brotherton checks tiny sensors in a test fixture, where he exposes them to different environments and measures their response to see how they perform. Brotherton is principal investigator on a project aimed at detecting a common type of homemade explosive made with hydrogen peroxide. (Photo by Randy Montoya) Click on the thumbnail for a high-resolution image.

That’s part of the challenge faced in developing a portable sensor to detect a common homemade explosive called a FOx (fuel/oxidizer) mixture, made by mixing hydrogen peroxide with fuels, said Chris Brotherton, principal investigator for a Sandia research project on chemiresponsive sensors. The detector must be able to spot hydrogen peroxide in concentrations that don’t also raise suspicions about common peroxide-containing products.

“Hydrogen peroxide explosives are a challenge because they are dangerous, but there are so many personal hygiene products that have hydrogen peroxide in them that the false positive rate is very high,” Brotherton said.

Brotherton’s Early Career Laboratory Directed Research and Development (LDRD) project proved a sensor could identify relatively high concentrations of hydrogen peroxide and differentiate that from a common interfering substance such as water, he said. The next step, Brotherton said, would be to work with an industrial partner to design an overall system that works faster and can be mass produced.

His work is built on field-structured chemiresistor technology developed at Sandia more than a decade ago by researchers James Martin and Doug Read. Chemiresistors are resistance-based sensors for volatile organic compounds, and the material developed by Martin and Read, who published several papers on their work, allows users to tailor the sensors’ response range and sensitivity.

A major challenge was distinguishing between hydrogen peroxide and water, which exhibit similar behavior in chemiresistors. The key was choosing certain molecules in a polymer matrix, suggested by Brotherton’s Sandia technical mentor, polymer chemistry expert David Wheeler. When exposed to peroxide, those molecules react in a different way than when exposed to water.

The idea is to engineer the polymer to be as similar to the target material as possible, relying on the undergraduate rule that like dissolves like. For example, Wheeler said, if the target is a substance that’s not very polar, you’d choose a polymer with nonpolar groups. If the target has a lot of polarity, like water does, you’d develop polymers that could hydrogen-bond with water.

The tiny sensor incorporates the polymer and chains of miniscule conductive metal beads. The polymer reacts when it’s exposed to the substance being analyzed.

“We tried to include specific molecules that would react with the peroxides,” Brotherton said.

Exposure to water also changes the polymer, but it returns to its previous state once the water is removed. Exposing the polymer to concentrated hydrogen peroxide, however, is irreversible.

“So once you’ve done this to the polymer you’ve permanently changed it,” Brotherton said. “Instead of being a reusable sensor, it’s more of a disposable dosimeter.”

It’s also a detector that doesn’t react to toothpaste and other common peroxide products, he said.

Detector has other potential uses

Manager Paul Smith said the sensor has other potential uses, such as monitoring underground water, looking for plumes of contamination or monitoring industrial processes.

The sensor isn’t a silver bullet, but Brotherton said the technology has shown good results.

“It has some challenges that have to be overcome, but we think it’s worth pursuing to the next level,” he said.

Researchers need to reduce the chemical reaction time so the sensor doesn’t take too long to be useful at a checkpoint, he said. The detector also must be incorporated into a larger unit that includes equipment to gather a sample for analysis.

The sensor doesn’t need a significant amount of electronic processing or power supplies, Brotherton said. “This technology would be easier to integrate into other detection technologies without impacting them too significantly,” he said.

It wouldn’t have to be a large unit. Various detectors on the market today are about the size of a small, handheld vacuum cleaner, Smith said.

Getting air samples to the detector

The support equipment would suck up a sample of air and the detector would test it.

“You’d need to know where the fumes were coming from,” Brotherton said. “It’s not enough to open up the whole room and suck in all the air and say, ‘There are peroxides somewhere in here, watch out.’ What we’d like to do is go up and down luggage, or be next to some sort of industrial process so we know this is most likely the source and it’s above a level we care about.”

Although a detector package could target a single type of vapor, a manufacturer could add it to a unit that detects several substances. That way, a checkpoint could have one sensing system rather than separate units for every material of concern, Brotherton suggested.

“Maybe it’s a suite of sensors to try to hedge our bets,” he said. “We’ve focused on a very specific application, but there’s no reason you couldn’t take this concept and use different polymers and look at multiple substances at the same time.”