ALBUQUERQUE, N.M. — Susan Seestrom, associate laboratories director for advanced science and technology and chief research officer at Sandia National Laboratories, has been named a fellow of the American Association for the Advancement of Science. 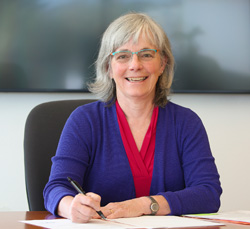 Susan Seestrom, associate laboratories director for advanced science and technology and chief research officer at Sandia National Laboratories, has been named a fellow of the American Association for the Advancement of Science. (Photo by Lonnie Anderson) Click on the thumbnail for a high-resolution image.

The physicist was cited “for her pathbreaking work in nuclear physics, especially using ultra cold neutrons, and her leadership, both in her [physics] community and at national laboratories.”

She is only the fourth presently active Sandia scientist to be elected by her peers.

The honor is awarded, according to a letter from the society, because of “scientifically or socially distinguished efforts to advance science or its applications,” and the “expectation that recipients maintain the highest standards of professional ethics and scientific integrity.”

Her most important contributions, Seestrom believes, have been made in program strategy development and in helping the research teams she works on to function more effectively.

Of international interest was her research into ultracold neutrons, important to basic science.

“We were able to create the world’s most intense source of ultracold neutrons using frozen deuterium,” she said. “A number of important experiments followed, concluding for me with a high-precision measurement of the neutron lifetime.”

The lifetime research, initiated under Los Alamos National Laboratory’s Laboratory Directed Research and Development program and later funded by the Department of Energy Office of Science and the National Science Foundation, was published in the journal Science in 2018.

She describes her role not in terms of personal brilliance but as helping an important collaboration succeed.

“I brought some order,” she said. “I may not be the best in articulating theoretical concepts or developing new detectors, but I can see problems clearly and focus on organizing a team to reach a goal.”

In the world of experiments, she said that hardly anything works the first time. “You have to have the perseverance to make things work. The biggest thing I did was keep our collaboration focused to use our time wisely in order to obtain a meaningful result. I also was able to perform one of the first of multiple analyses of our comprehensive neutron lifetime data sets.”

Her experience has led her “to often think that there are two kinds of people in physics — very deep or very broad. I think I am the latter, and that ability to be interested in many different things is well-aligned with management positions.”

Her appreciation of the value of strong organizational skills, during a productive research career at Los Alamos National Laboratory, led her to management when she applied for a deputy group leader job.

“I was lucky to get the job,” she said. “But I applied because thought I could do it better than most people I had observed doing these jobs.”

She enjoys opportunities to make an impact on programs. She envisions enhanced agility for the important Laboratory Directed Research and Development office she oversees, which maintains a program designed by Congress and the national labs to create and evaluate new technologies.

“We need to be able to move our research resources quickly, as we did to a problem like the COVID global pandemic,” she said.

On a larger scale, impacting programs includes replacing the aging Annular Core Research Reactor radiation test facility and designing the next more powerful version of Sandia’s Z pulsed power machine. Z is already the most powerful producer of X-rays on the planet, with missions that include investigating high-density radiation frontiers for national defense and for basic science.

Seestrom followed a non-typical path to executive leadership. She grew up in central Minnesota as the oldest of four children. Her family ran an electrical contracting business.

For financial reasons, she attended the University of Minnesota in Minneapolis. She always felt her family expected her to attend college, despite neither parent having achieved a degree.

She loved her introductory physics courses, in which she received straight A’s, and appreciated the structure provided in the physics study halls when students groups, led by graduate assistants, would work through the day’s physics problems.

She married in her senior year of college and gave birth to her first child while in graduate school. While both events were considered social challenges decades ago, she made it through school. “I wondered myself if I’d be a disappointment,” she said. “But, as it turned out, I could handle it.”

The American Association for the Advancement of Science will hold a virtual Fellows Forum on Feb. 13, when new fellows will participate in an induction ceremony. They will receive an official certificate and a gold and blue rosette pin (representing science and engineering, respectively) to commemorate their election.

AAAS is the world’s largest general scientific society and publisher of the journal Science, among other technical publications. It was founded in 1848 and includes more than 250 affiliated societies and academies of science, serving 10 million people. The nonprofit’s mission is to “advance science and serve society” through initiatives in science policy, international programs, science education, public engagement and more.