How Sandia Labs is revealing the inner workings of quantum computers

ALBUQUERQUE, N.M. — A precision diagnostic developed at the Department of Energy’s Sandia National Laboratories is emerging as a gold standard for detecting and describing problems inside quantum computing hardware. 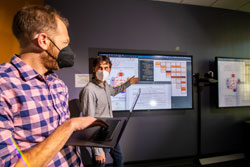 Sandia National Laboratories researchers Andrew Baczewski, left, and Erik Nielsen use gate set tomography to analyze problems in a quantum processor. (Photo by Rebecca Gustaf) Click on the thumbnail for a high-resolution image. Media can click the link here for video B-roll (57 MB).

Sandia scientists collaborated with Australian researchers at the University of New South Wales in Sydney, led by Professor Andrea Morello, to publish one of today’s papers. Together, they used GST to show that a sophisticated, three-qubit system comprising two atomic nuclei and one electron in a silicon chip could be manipulated reliably with 99%-plus accuracy.

In another Nature article appearing today, a group led by Professor Lieven Vandersypen at Delft University of Technology in the Netherlands used gate set tomography, implemented using Sandia software, to demonstrate the important milestone of 99%-plus accuracy but with a different approach, controlling electrons trapped within quantum dots instead of isolated atomic nuclei.

“We want researchers everywhere to know they have access to a powerful, cutting-edge tool that will help them make their breakthroughs,” said Sandia scientist Robin Blume-Kohout.

Future quantum processors with many more qubits, or quantum bits, could enable users working in national security, science and industry to perform some tasks faster than they ever could with a conventional computer. But flaws in current system controls cause computational errors. A quantum computer can correct some errors, but the more errors it must correct, the larger and more expensive that computer becomes to build.

So, scientists need diagnostic tools to calculate how precisely they can control single atoms and electrons that store qubits and learn how to prevent errors instead of correcting them. This increases the reliability of their system while keeping costs down.

Gate set tomography is Sandia’s flagship technique for measuring the performance of qubits and quantum logic operations, also known as “gates.” It combines results from many kinds of measurements to generate a detailed report describing every error occurring in the qubits. Experimental scientists like Morello can use the diagnostic results to deduce what they need to fix.

“The Quantum Performance Laboratory at Sandia National Labs, led by Robin Blume-Kohout, has developed the most accurate method to identify the nature of the errors occurring in a quantum computer,” Morello said.

While the Delft team used the pyGSTi software without assistance from the Sandia team, the UNSW-Sandia collaboration used a new, customized form of gate set tomography developed by the Sandia researchers. The new techniques enabled the team to rule out more potential error modes and focus on a few dominant error mechanisms.

But when the Sandia team studied the GST analysis of the UNSW experimental data, they discovered a surprising kind of error that Morello’s group did not expect. The nuclear-spin qubits were interacting when they should have been isolated. Concerned that this error might indicate a flaw in the qubits, the team turned to Sandia’s Andrew Baczewski, an expert in silicon qubit physics and a researcher at the Quantum Systems Accelerator, a National Quantum Information Science Research Center, to help find its source.

“It came to occupy a lot of my free time,” Baczewski said. “I would be out for a walk on a Saturday morning and, out of the blue, something would occur to me and I would run home and do math for an hour.”

Eventually, Baczewski and the rest of the team tracked the error to a signal generator that was leaking microwaves into the system. This can be easily fixed in future experiments, now that the cause is known.

Blume-Kohout said, “It was really fulfilling to see confirmation that GST even detected the errors that nobody expected.”

“The collaboration with Sandia National Laboratories has been crucial to achieve the milestone of high-fidelity quantum operations in silicon,” Morello said. “The theoretical and computational methods developed at Sandia have enabled the rigorous demonstration of quantum computing with better than 99% fidelity and have provided precious insights into the microscopic causes of the residual errors. We plan to expand this strategic collaboration in years to come.”