ALBUQUERQUE, N.M. — This fall, four Sandia National Laboratories employees were recognized by the Society of Women Engineers. Laura Biedermann, Annie Dallman, Erica Douglas and Chris LaFleur were recognized for their professional excellence, leadership and support of women in science, technology, engineering and mathematics, or STEM.

The society, also known as SWE, has empowered women to achieve their full potential in careers as engineers and leaders for more than 70 years. In October, SWE held an in-person reception in honor of the award winners as part of their annual conference, held in a hybrid format. Dallman was able to attend the gathering in person, as part of Sandia’s recruiting team.

“I’ve recruited at other events, but it was nice to be at the event for women in engineering,” Dallman said. “Many of the collegiate attendees asked for career advice, not just about Sandia, so it felt more impactful.” 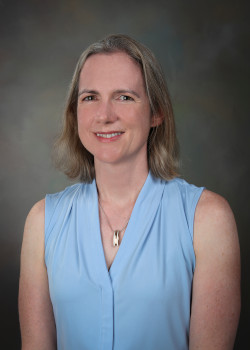 Laura Biedermann, a Sandia National Laboratories physicist, received a SWE 2021 Spark Award for her work co-founding the PI Workshop in 2013 and co-creating Sandia’s Peer Mentoring Steering Committee in 2016. Both efforts support the career development and retention of Sandia employees. Photo by Lonnie Anderson

Biedermann was one of five women who received a SWE 2021 Spark Award. This award recognizes those who have contributed significantly to the advancement of women in STEM through mentoring those around them. As a Sandia physicist, Biedermann evaluates electrical conduction mechanisms in novel materials, investigates interactions between X-rays and materials, and conducts material aging and reliability studies.

However, the award principally recognized her for her work co-founding the PI Workshop in 2013 for new principal investigators and co-creating Sandia’s Peer Mentoring Steering Committee in 2016. Both efforts support the career development and retention of Sandia employees, whether they are female or not.

“I’m a physicist who mentors both men and women, so I was flabbergasted to be nominated for the award, and to win,” Biedermann said. “It just made me think of all the amazing folks I’ve worked with, and how the mentoring initiatives have grown and evolved. My advice for new Sandians is to reach out and get involved in activities — professional activities, networking organizations, volunteering opportunities — it’s very important to not only have a strong technical depth in your field, but also to be exposed to the breadth of research and mission work at Sandia.” 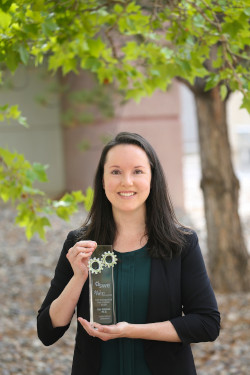 Dallman was one of 10 women who received a SWE 2021 Distinguished New Engineer Award. This award recognizes women with outstanding technical performance and leadership in SWE who are in the first ten years of their career.

Dallman received her doctorate in engineering from the University of Notre Dame in 2013. She joined Sandia as a postdoctoral researcher in renewable energy, and has since applied her expertise in modeling and simulation, fluid dynamics and data analysis to other areas such as nuclear nonproliferation. Her leadership in SWE began in graduate school where she focused on organizing programs of interest for female engineering graduate students, which later grew into a more widespread GradSWE program. After graduate school, Dallman joined the Central New Mexico Section of SWE and is the scholarship co-chair for the section.

“I’m grateful to be formally recognized by SWE for my technical achievements and community impact,” Dallman said. “I’ve been fortunate to work in a variety of research areas at Sandia, and I enjoy taking on new challenges. Of course, I’m very appreciative of my manager and mentors for their support.” 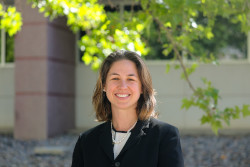 Douglas was one of 10 women who received a SWE 2021 Emerging Leader Award. This award recognizes women who have been actively engaged in engineering and demonstrated outstanding leadership in the first 15 years of their career.

Douglas started at Sandia 10 years ago as a process engineer for Sandia’s Microsystems Engineering, Science and Applications Center. About three and a half years ago, she moved to management, first over the team she had been a part of, and then over other groups as needs arose. Even before she became a manager, she found mentoring technologists, engineering staff and postdoctoral researchers very rewarding, especially when the postdocs transitioned to independent staff members.

“It’s an honor to represent Sandia and the teams I’ve worked with,” Douglas said. “I think it speaks to the exemplary nature, and quality of work, of the individuals I’ve had the pleasure to lead. My advice for women considering the management track is to not be afraid of making the jump, it’s very rewarding to see folks realize the potential they may not have seen in themselves.” 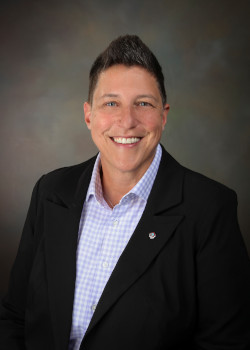 Chris LaFleur, a Sandia National Laboratories fire protection engineer, received a SWE 2021 Advocating for Women in Engineering Award for her service as chair of the Sandia Pride Alliance Network, especially her work to make Sandia a more supportive workplace for transgender individuals. Photo by Lonnie Anderson

LaFleur was one of five women who received a SWE 2021 Advocating for Women in Engineering Award. This award recognizes women with professional excellence and advocacy for women in STEM. LaFleur evaluates fire risks for emerging energy technologies, such as hydrogen-powered cars and natural-gas-powered trains.

She has mentored postdocs and junior staff and is the chair of the Sandia Pride Alliance Network. She is especially proud of her advocacy work through the employee resource group to make Sandia a more supportive workplace for transgender individuals over the past five years or so. This includes planning educational seminars and developing a resource guide for transitioning Sandians and their managers and coworkers. The guide includes everything from advice on how to come out as transgender to your coworkers to the process of changing your name and gender legally and within the human resources system.

“If trans women aren’t comfortable working at Sandia, they’ll go work somewhere else,” LaFleur said. “And these are highly educated engineers who are among the best and the brightest. This work helps everyone at Sandia.”