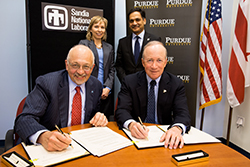 The document was signed by Sandia President and Laboratories Director Paul Hommert and Purdue President Mitch Daniels at Sandia’s office in Washington, D.C.

The MOU has three principal goals: solve large national problems, sustain and engage human capital and accelerate adoption of technology. MOUs such as this one are expected to bolster connections between national research universities and federally funded research and development centers, such as Sandia.

The MOU will provide opportunities for students and faculty to experience research work at a national lab; enable joint recruiting of top graduate students, postdoctoral fellows and faculty; increase transfer of technology from Sandia and the university to the private and federal sectors; and build collaborations that address nationally significant problems.

“This alliance advances our long-standing partnership with Purdue University to a more strategic level and will serve as a model for productive collaborations between Sandia and other national research universities,” Hommert said.

Said Daniels, “Sandia Labs is recognized throughout the world for its groundbreaking research. It’s a tribute to the faculty and students of Purdue that a research institution of Sandia’s stature wants to deepen our relationship.”

Among the technical frontiers of common interest to Sandia and Purdue researchers are trusted systems and communications, cybersystems resiliency, detection at the limit, power on demand and the science and engineering of quantum information systems.

More than a dozen Purdue graduate and undergraduate students spent last summer at Sandia and three interns currently are at Sandia. Other Purdue students pursue advanced degrees at Sandia through the labs’ fellowship programs and a Purdue faculty member is spending his sabbatical year conducting research in Sandia’s Engineering Sciences Center.

By fostering collaboration between a national lab and a prominent national research university, the partnership will take a multidisciplinary approach to solving big national problems and to introducing new technologies into the marketplace. A key goal is to engage early-career researchers at both institutions to work on complex problems of practical importance. Opportunities for joint faculty appointments and for research sabbaticals are expected to further intensify collaborations.