It is now time to replace and upgrade the aging radiation detection systems before the end of their effective life. 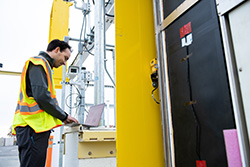 The Department of Homeland Security turned to Sandia and Pacific Northwest national laboratories to create the blueprint for a new generation of radiation portal monitors that eventually will replace more than 1,400 monitors deployed across the United States. Homeland Security manages the work through its Radiation Portal Technology Enhancement and Replacement project for the Countering Weapons of Mass Destruction Office.

The blueprint, known as the interface specification, outlines a redesigned radiation portal monitor based on modular, open-systems architecture. That allows upgrades or replacement to each module or unit in the system as new technologies emerge, or as new threats arise, without replacing the entire system, said Will Johnson, a Sandia physicist.

The modular design includes built-in diagnostic tools for state-of-health monitoring and predictive maintenance and is expected to simplify upkeep and upgrading of the monitors over time, lowering the government’s lifetime operating costs. 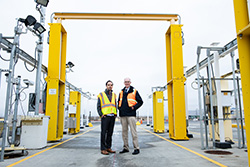 “This means scanning cargo and conveyances to detect radiological and nuclear threats with a greater level of accuracy, resulting in increased protection, decreased costs and reduced delays at ports of entry,” Johnson said.

Cutting down on the number of nuisance alarms means fewer vehicles and containers will need secondary inspection, so the flow of trade and commerce at ports of entry will keep moving, even though these more sensitive detectors can better detect nuclear or radiological threats.

“Our work on this project is a really good example of using Sandia’s radiation detection hardware expertise and our nuclear threat detection knowledge and systems engineering capabilities, while partnering with other labs for their deep operational and testing experience,” Johnson said. “This has been a tremendously successful partnership to solve a national security challenge.”

To test and validate the potential capabilities of the interface specification, the team constructed a proof-of-concept demonstration portal at Pacific Northwest National Laboratory’s Interdiction Technology and Integration Laboratory. The Department of Homeland Security is engaging industry partners through a federal acquisition process. Once awarded a contract, vendors will use their experience and expertise to develop individual modules or devices to integrate with existing infrastructure.