Previous rockets were not retrieved, limiting the amount of information gathered. Researchers could only access data that was sent from the rocket wirelessly during flight. Sandia estimates that retrieving the rocket with its onboard memory will allow the labs to collect about 40 times more data, dramatically accelerating the program’s scientific mission.

Sandia had been anticipating the HOT Shot upgrade since the inception of the program in 2017 and began implementing it in October 2020, Forsberg said. Sandia manages HOT Shot and conducts each launch for the National Nuclear Security Administration.

“Vehicle recovery is something that we wanted to do for a long time,” Forsberg said. “NASA has an outstanding capability, so we partnered with them for this launch.”

Recovery will now be an option for future launches, dependent on the needs of experiments and launch site capabilities, Forsberg said.

The sounding rocket is a two-stage Terrier-Improved Malemute booster stack. It stands about 35 feet tall and is 18 inches wide at the base, Forsberg said.

Sandia aerospace engineer Katya Casper is taking advantage of the upgrade. Thanks to the increased memory capacity, she was able to equip the rocket with 144 sensors to detect temperature, air pressure, vibration and mechanical stress. The information she gathers helps her study in minute detail how air flows over fast-moving vehicles so she can improve the accuracy of Sandia computer models used to make pre-flight predictions. 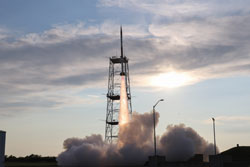 She said she expects to get back several gigabytes of data from her sensors, some of which take 2.5 million measurements per second.

“Recovering onboard data is key to this experiment,” Casper said. “If we were limited to only telemetered (wirelessly transmitted) data, we would have to limit the number of sensors and the data rates we could acquire.” The result would be a fraction of the data she needs to build a complete model.

Researchers printed electrical circuits onto objects inside the rocket in lieu of cables using additive manufacturing. Data taken during flight will show if the printed circuit traces and associated connectors survived the flight and provided continuous power and communication signals. But recovering the rocket allows the team to conduct post-flight electrical testing and visual inspection that could be critical to identifying undetected damage to the potentially vulnerable electrical connections.