ALBUQUERQUE, N.M. — In 1982, then-Sandia National Laboratories researcher Gordon Osbourn published a theoretical paper that asserted the previously unthinkable: that ultra-thin layers of mismatched atomic lattices could overcome the strain of their union and successfully form a defect-free bond. 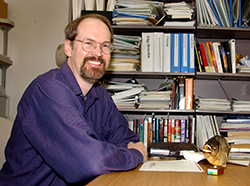 Gordon Osbourn at the desk in his office at the time of his 2002 appointment as Sandia National Laboratories’ fourth fellow. Osbourn, now retired, was the first Sandia employee to be designated a fellow while still an active on-roll researcher. (Photo by Randy Montoya) Click on the thumbnail for a high-resolution image.

Going against the grain of the times, Osbourn’s calculations stimulated creation of the new field of strained-layer superlattices. Just one of the myriad results of that insight — strained-layer lasers — today dominate the entire semiconductor laser market. Approximately one billion are produced each year for a market valued at approximately $5 billion.

The new insights also opened a path to the high-bandwidth optical fiber network of the Internet. High-power strained-layer lasers also are used as power sources for optical amplifiers, an application that requires reliable undersea operation for at least 25 years. Others in the cornucopia of products that emerged down the line include laser printers, DVDs, Blu-ray players, certain solar photovoltaic devices, very efficient sensors and pollution monitors, optical mice, laser pointers and the vertical-cavity surface-emitting lasers (VCSELs) used in commercial atomic clocks.

For that early work, Osbourn, a retired Sandia Fellow, and three other scientists shared a portion of the 2014 Rank Prize, a major award in the field of optoelectronics. The awards are made every two years for achievements considered by a panel of prize committee members “to be of significant benefit to humanity.”

“It’s very satisfying to see just how widespread the impact of our work has become,” said Osbourn. “Most people aren’t even aware of Sandia’s essential role in creating so many modern technologies.”

Said acting Sandia Vice President and Chief Technology Officer Julia Phillips, “Osbourn’s prediction of the existence and power of strained-layer superlattices was transformational. His insight opened the eyes of scientists to the possibility of tailoring the properties of semiconductor devices in a way that had previously been viewed as impossible. It is hard to imagine life in the 21st century without the technologies that this discovery has enabled.”

Semiconductor lasers are produced by the sequential deposition of nanothin layers of different materials. Their arrangement controls the optical and electrical properties of the device. Sandia, and later many other institutions, invested much effort in the study of these new structures following in the footsteps of Osbourn’s pioneering work.

That is because the paper and its follow-ons predicted a large and completely unexpected set of new semiconductor structures for possible use in device technology. The initial paper predicted not only that certain mismatched lattices would be stable but that they would have unique electrical and optical properties, contradicting the then-common scientific belief that each lattice layer should have the same or very similar crystal structure to ensure that the composite structure was not subjected to mechanical strain.

Even more remarkably, Osbourn’s follow-on calculations supported the unexpected, and initially widely disbelieved, prediction that the strain itself could be used to improve the properties of devices made from these new materials.

Ripples from those initial, much-disputed papers led researchers to fabricate structures they hadn’t thought about trying before, because they had been convinced the structures wouldn’t work.

Other important applications for strained-layer materials have been developed extensively outside of Sandia that do not involve lasers at all. These include strained silicon germanium layers in microprocessor chips, and high-frequency high-electron-mobility transistor amplifiers used in cell phones and satellite television receivers.

In Osbourn’s category for “pioneering work on strained-layer laser structures,” each of the four scientists seminal in advocating the use of strained-layers to improve semiconductor lasers was awarded 15,000 pounds (about $25,000) in a February ceremony in London. The other three honorees are Alf Adams of the University of Surrey, UK; Eoin O’Reilly of Tyndall National Institute, Cork, Ireland; and Eli Yablonovitch of the University of California.