ALBUQUERQUE, N.M. — For 20 years, Sandia National Laboratories researchers have been able to leave to start or join small companies, knowing they can return. Their work has made a difference: creating jobs, bringing Sandia expertise into the private sector and boosting economic development, a new survey shows. 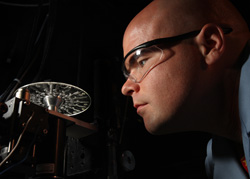 Greg Sommer was on the Sandia National Laboratories team that developed the medical diagnostic lab-on-a-disk SpinDx. It is being commercialized using Sandia’s Entrepreneurial Separation to Transfer Technology program. Sommer left the labs and co-founded Sandstone Diagnostics in Livermore, Calif., which is bringing the technology to market. (Photo by Dino Vournas) Click on the thumbnail for a high-resolution image.

“The Entrepreneurial Separation to Transfer Technology (ESTT) program is an innovative tech transfer tool that has endured,” said Jackie Kerby Moore, Sandia’s manager of Technology and Economic Development. “Not only do we have many success stories, but we’ve measured the economic impact, which shows positive benefits to the local community. Furthermore, entrepreneurs who return to Sandia bring new experiences that benefit the labs.”

Thirty-three of the 99 companies involved in ESTT since it was launched in 1994 responded to the survey gauging its economic impact. Respondents said 379 jobs were created by their companies through the program since it began, and that in 2012 they employed 1,550 people at an average annual salary of $80,000. Their 2012 sales revenue was $212 million. From 2008 through 2012, the businesses invested $40 million in equipment and $277 million in goods and services. Two-thirds of them had commercialized a technology as a result of ESTT.

“These are notable numbers and reflect just a third of the companies affected by the program,” Kerby Moore said. “ESTT is a tool Sandia uses to deploy technology by giving people an opportunity to take a license and form a company. Four startups using Sandia technology licenses came out of the program in the past two years alone, along with a number of company expansions. Of these, three licensed technologies from Sandia.”

Kerby Moore said one of Sandia’s hottest technologies, the medical diagnostic lab-on-a-disk SpinDx, is being commercialized using ESTT. Greg Sommer, a former Sandia researcher who helped develop SpinDx, co-founded and is chief executive officer of Sandstone Diagnostics in Livermore, Calif., which is bringing the technology to market.

“The high-tech environment at Sandia is ripe for innovation and game-changing technologies,” he said. “The ESTT program allowed us to launch Sandstone and develop cutting-edge medical products based on technology we originally developed for Sandia’s biodefense missions.”

ESTT encourages researchers to take technology out of the labs and into the private sector by guaranteeing their jobs back if they return within two years. They can request a third-year extension. The survey shows 145 Sandia researchers have left on ESTT, 62 to start a business and 83 to expand one. Forty-one, or 28 percent, returned to the labs while 98 researchers left for good. Six are currently on ESTT. Of the 99 companies impacted by the program since 1994, 49 were startups and 50 were expansions.

Of the 145 who left on ESTT, 27 of the companies they joined licensed a Sandia technology.

Sandia business development specialist Genaro Montoya, the program leader, said entrepreneurial training is offered to help researchers considering ESTT. “Anyone at the labs can take the training,” he said. “It gives an idea of what’s involved in starting a small business.”

Looking back at 20 years, Kerby Moore said ESTT has been an important piece of Sandia’s tech transfer and economic development portfolio. “It is still relevant and has a lot of life ahead,” she said.