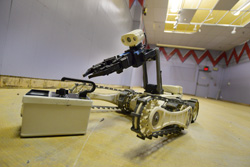 2015 Robot Rodeo: Bomb squads from across the country saddled up their robots and duked it out at the ninth annual Western National Robot Rodeo at Sandia National Laboratories. (Photo by Randy Montoya) Click on the thumbnail for a high-resolution image.

Robots are life-saving tools for these emergency response teams, providing them a buffer from danger. Ten teams from around the region will compete in 10 events to see who can use their robots the quickest and safest in realistic, simulated scenarios. The top three teams will receive trophies, but the bomb squads are mostly after bragging rights, said Jake Deuel, Sandia robotics manager and Robot Rodeo coordinator.

“The teams are usually frustrated with us by the second scenario, and that’s a good sign that we’ve developed challenging scenarios. If it’s easy, it’s a waste of their time,” said Deuel. “The whole point of the Robot Rodeo is to help these guys and gals understand where the operational edge of their equipment and procedures are, so that they don’t go over that edge during a real life call.”

Scenarios from previous years include removing a mock explosive device from an airplane or train car, removing simulated fuel rods from a damaged nuclear power reactor, and locating and removing radiation sources from a mock village. In 2015, the bomb squads collaborated with an unmanned aerial vehicle, colloquially known as a drone. The UAV provided situational awareness and oversight for the ground robotic team, allowing them to locate and inspect suspicious items faster and more efficiently. 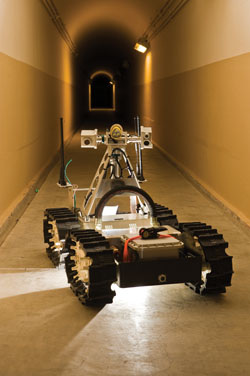 Sandia National Laboratories’ Gemini-Scout Mine Rescue Robot is equipped to handle any number of obstacles, including rubble piles and flooded rooms, to help rescuers reach trapped miners safely and efficiently. (Photo by Randy Montoya) Click on the thumbnail for a high-resolution image.

Sandia works with Los Alamos National Laboratory to put on the annual competition. This year instructors from the FBI’s Hazardous Devices School also will run several of the training sessions and events. In addition, one of the scenarios this year will involve locating a mock “radioactive” liquid leak and mitigating it, perhaps with a robotic bucket brigade.

“We keep coming back to the Robot Rodeo because it’s a training opportunity that really pushes our skill set with the robots,” said Sgt. Carlos Gallegos, commander of the Albuquerque Police Department’s bomb squad, whose team has attended the rodeo every year and won twice. “We appreciate Sandia and Los Alamos national laboratories for taking the time to put on such a beneficial week for the local bomb squads.”