ALBUQUERQUE, N.M. – Sandia National Laboratories is hosting the seventh annual Western National Robot Rodeo and Capability Exercise, a lively and challenging five-day event that draws civilian and military bomb squad teams from across the country to see who can most effectively defuse dangerous situations with the help of robots. 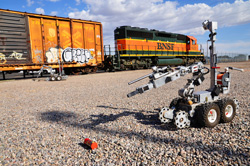 The annual Robot Rodeo at Sandia National Laboratories gives participants the opportunity to practice using robots to resolve realistic scenarios. Robots, guided remotely by handlers, had to search in and around four rail cars for devices in this 2011 simulation. (Photo by Randy Montoya) Click on the thumbnail for a high-resolution image.

The 10-event technical competition provides an opportunity to practice using robots and new technology in a low-risk, but competitive environment. Scenarios are realistic, with elaborate props to prepare officers for real events.

“Our goal is to provide an unmatched caliber of training. We want them to experience a variety of situations so they can be prepared when they’re called upon to handle a dangerous situation,” said Jake Deuel, a Sandia manager and Robot Rodeo coordinator. “Year after year, we hear how much the participants gain from this experience, and many say it is among the most valuable training they’ve had.” 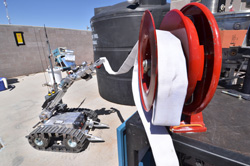 Robots are used by emergency responders to keep danger at a distance, and the Robot Rodeo at Sandia National Laboratories allows responders to get hands-on training in a lively, competitive and low-risk environment. (Photo by Randy Montoya) Click on the thumbnail for a high-resolution image.

In past scenarios, participants had to identify, locate and dispose of suspected hazardous material stored in a residential garage, locate and move simulated fuel rods from a nuclear reactor damaged by a tornado, and remove simulated explosives placed by a terrorist in the overhead rack of an airplane or near a water tank. In other events, participants had to explore a ravine for tripwires used to set off improvised explosive devices and perform a NASCAR-style, rapid effort to replace a robot’s treads in the field.

The scenarios change every year, which brings many of the competitors back. “Every year since its inception, the Robot Rodeo coordinators have made the scenarios increasingly complex, so it gives us a great chance to practice our skills and introduce new members of our team to different situations,” said Sgt. Jose Salazar, commander of the New Mexico State Police Bomb Squad, whose team is returning this year. “At the same time, we get to see what the robots are capable of and the vendors give us the chance to see what new technologies are on the market.”

The event is free of charge for participants and allows up to 10 different teams to practice scenarios where a robot can be a life-saving tool. This year, competitors include the Albuquerque Police Department, Riverside County Sheriff’s Office from California, Kirtland Air Force Base Explosive Ordinance Disposal team, New Jersey State Police, Doña Ana County Sheriff’s Office, Los Alamos Police Department and the New Mexico State Police.