ALBUQUERQUE, N.M. — The history of rocket testing and aerospace work at Sandia National Laboratories is the history of aero everything.

“There was aeroheating and aeroballistics and aerodynamics and all things aero,” said Myra Buteau, a Sandia Labs video producer whose latest half-hour documentary, “It Really is Rocket Science!” tells the story of the laboratories’ rocketry work beginning in 1945. The video, released this spring, won a Gold Marcom award from the Association of Marketing and Communications Professionals.

The impetus for Sandia Labs’ decades of aerodynamics research and experiments came from its work on nuclear weapons, with an underlying push from the early space race between the U.S. and Russia in the 1950s and 1960s.

Buteau, who narrates the film, points out the first atomic bombs were aerodynamically incorrect. 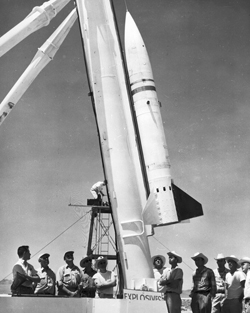 “The first bomb was physics rich and aerodynamic poor, meaning that the preponderance of effort was put into the physics of the device versus the means by which it was delivered,” Jerry McDowell, a former deputy labs director who retired in 2015, said in an interview. “As the U.S. began to build a larger and more diverse stockpile it became apparent that paying attention to aerodynamic design was vital.”

Buteau expanded on that idea. “So they started looking at how this weapon shape functions as it drops from a plane. Then they looked at the trajectory. It just kept building and building to parachutes and what does that do aerodynamically to the weapon shape and what impact does that have and how do we get it smaller?”

“A lot of the story was about the people, the people who did all this amazing work,” Buteau said. “A lot of it was the passion they had. You could see them reliving these events,” including traveling all over the world for tests.

Since he knew those interviewed, McDowell “knew what questions to ask, knew what information we should try and pull out,” Buteau said.

Rekindling memories of a stimulating time

McDowell said, “I felt an obligation to not put words in their mouths, but rather to stimulate some long-dormant memories of their contributions.”

“I hope today’s Sandia employees will see a sense of pride and devotion to country in the rocket science documentary and be inspired to carry that esprit de corps forward,” he said. “The film is not intended to reflect on what was done, but rather to motivate what can be. It’s this generation’s turn.”

McDowell said much of Sandia Labs’ success is due to the little guy, perhaps someone without a higher academic degree but with experience and common sense — a dynamic he saw in rocket field testing.

“I was one of the young Ph.D.’s hired into the group, but I learned so much more from the folks that turned the wrenches, machined metal into rocket bodies, labored night and day on the cameras at Tonopah Test Range,” he said. “I hope that as Sandia embraces the toughest challenges of the future they will take a lesson from the film: Even the most ordinary of people, bound together in a great cause and led forward by determination to succeed, can change the world.”

Buteau had no technical background in anything aero, and joked she felt she’d earned a degree by the time she studied re-entry vehicles, heat factors, materials science, wind tunnels and other topics. She had to understand such things as Marchant calculators, electromechanical machines that augmented hand calculations in rocketry’s early, pre-computer days.

She began her research with an inch-thick typewritten manuscript by Randy Maydew, who formerly managed the Aerodynamics Department. The manuscript covered the labs’ aeroballistics history to 1985, and Buteau found people to talk about Sandia Labs’ rocketry up to today. Aeroballistic work continues at Sandia Labs.