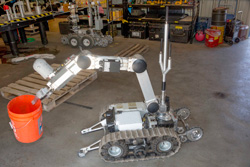 One robotics team catches a “hazardous” liquid in an orange bucket while maneuvering around debris and working with another robot trying to stop the leak by turning three valves during the 2017 Robot Rodeo at Sandia National Laboratories. (Photo by Norm Johnson) Click on the thumbnail for a high-resolution image.

ALBUQUERQUE, N.M. — For a dozen years, robotics experts from the national laboratories have shared their skill with first responders who use robots for hazardous tasks by coordinating annual training competitions to help prepare them for dangerous real-world situations.

“Each scenario is designed to push the teams and the robots to their limits, so they can learn how to work around those limits and gain confidence,” said Jake Deuel, Sandia robotics manager and Robot Rodeo coordinator. “The bottom line of the Robot Rodeo is we’re trying to take good robot operators and turn them into great robot operators.”

Scenarios from last year included “What a Mess,” in which teams had to use their robots to stop a “hazardous” leak in an area too dangerous for humans to enter and “Stairway to Heaven,” which involved the robots having to climb flights of stairs and solve dexterity challenges on each level. This year, two scenarios are “Red Dawn,” like the movie, and “Water Park.” Imagine what these scenarios may entail as the participants certainly are. 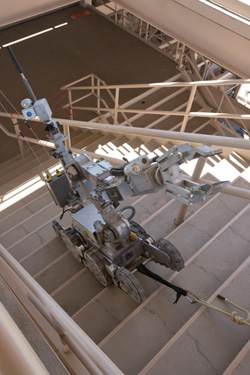 A hazardous duty robot climbs the second of three flights of stairs during the 2017 Robot Rodeo at Sandia National Laboratories. The safety line catches the robot if it falls, ensuring it doesn’t get damaged. (Photo by Norm Johnson) Click on the thumbnail for a high-resolution image.

Instructors from the FBI’s Hazardous Devices School will run several events and sponsors from the Department of Energy Office of Environmental Management will observe this year’s competition. For the first time, Sandia is hosting a robotics camp for local high school students the same week. The students will play an important role in one of the Robot Rodeo scenarios.