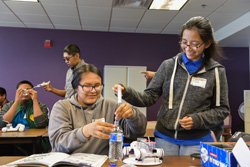 Students work on building fuel cell cars during a recent Dream Catchers Science Program class, sponsored by Sandia National Laboratories and held at the University of New Mexico-Gallup campus. (Photo by Randy Montoya) Click on the thumbnail for a high-resolution image

The latest hands-on science and engineering program was recently held at the University of New Mexico-Gallup campus.

Seeing themselves as scientists, engineers

The program was launched in 1991 by Sandia’s American Indian Outreach Committee.

“We do that by selecting areas where there are high populations of American Indians,” said Ben Mar, a program volunteer and current American Indian Outreach Committee chair. “When we go to these areas and the students see that the instructors look like them, it’s empowering — they are better able to see themselves in these scientists and engineers.”

Growing up, his mother worked as a keyboarding instructor for Albuquerque Public Schools, which exposed him to technology at an early age. He learned more about computers and programming and, today, works as a cybersecurity engineer.

Two years ago, computer scientist Lozanne Meyer stepped into the role of program coordinator. She had previously served as a volunteer teaching the Scratch programming class. Prior to 2016, Dream Catchers was held in Albuquerque during the summer months. Since then, the program has been offered throughout New Mexico cities including Farmington, Crownpoint and Grants.

This is the second year Sandia has partnered with NM MESA.

“Once I took on the program coordinator role, I revamped the program to take it on the road, where we formed the partnership with New Mexico MESA. That allowed us to serve 221 students, compared to 60 students in previous years,” said Meyer. Students took to the track to launch fuel cell cars they constructed. Volunteers from Sandia National Laboratories also taught Lego robotics and cyber and information technology classes. (Photo by Randy Montoya) Click on the thumbnail for a high-resolution image

One of the most obvious benefits of the partnership is the ability to bring the program to more rural areas, said Smith. Of the nearly 3,800 students participating in NM MESA last school year, 78 percent were minorities. In the west region, 98 percent of the roughly 500 MESA students are American Indian. The region includes Gallup-McKinley and Grants-Cibola county school districts, as well as Bloomfield Municipal schools and Navajo Preparatory School.

“There are a lot of STEM-focused programs available to students in larger or more populated areas, but the further away from the city, the less likely those opportunities will be available to students. The need for exposure to STEM fields is crucial in these areas,” said Smith.

When she met Tapia through the MESA advisory board, they discussed the need to help bridge the gap by providing STEM outreach in western New Mexico. The partnership flourished, and student participation numbers more than doubled in the first year. Sandia National Laboratories volunteers pose with students from Los Alamitos Middle School and Thoreau High School outside of the University of New Mexico campus in Gallup, New Mexico. (Photo by Randy Montoya) Click on the thumbnail for a high-resolution image

“A lot of these students have never been outside of their areas,” Smith said. “They have no idea what a career in STEM would be like or that there are thousands of STEM jobs available to them.”

In 2011, American Indians accounted for only 0.4 percent of the population working in STEM fields, according to a report by the U.S. Census Bureau.

“My hope for the students is that they have fun while being exposed to new ideas, concepts and opportunities; that they learn how to develop problem-solving and critical-thinking skills; and that the opportunity to visit a university or college campus will lead them to envision themselves in college, pursuing a degree in a STEM-related field,” said Meyer.