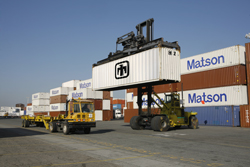 The event, part of a two-week demonstration for those in government, research, and industry, highlights technologies being developed to ensure cargo contents are not tampered with or removed.

Media are invited to attend the Aug. 28 demonstration, and must contact Stephanie Holinka at slholin@sandia.gov or 505-284-9227 prior to Thursday, Aug. 27 for credentialing and escort. Media will be escorted from a location off base to the TEAMS site. Media attendees must be U.S. citizens. Wireless microphones are not permitted at the site.

DHS is sponsoring research in key topical areas in order to discover the necessary requirements for robust shipping container security standards. This research is structured to develop representative container security technologies that can be integrated into an effective system.

Sandia is assisting DHS in developing an open standard that specifies security requirements, operational procedures, and communications protocols that allow for continuous monitoring of cargo container integrity and automated integrity-checking of containers at key points in shipping processes. The standards being developed will allow for the creation of flexible container security components that can be integrated with existing maritime containers and truck trailers, and be tailored to the operational concepts of individual organizations. Several technologies developed in support of these goals will be demonstrated, including tamper detection equipment, communications devices, tracking systems, and new composite materials.