The difference between what was previously seen on the cell surface (left image) is dramatically different from what Jeri Timlin, Jesse Aaron, and Bryan Carson are now able to image (right). Orange areas correspond to the bacterial lipopolysaccharide (LPS), derived from E. coli, and the green areas correspond to the cell's TLR4 receptors. (Photo by Jeri Timlin, Jesse Aaron and Bryan Carson) Click on the thumbnail for a high-resolution image.

ALBUQUERQUE, N.M. – Researchers at Sandia National Laboratories have developed a super-resolution microscopy technique that is answering long-held questions about exactly how and why a cell’s defenses fail against some invaders, such as plague, while successfully fending off others like E.coli. The approach is revealing never-before-seen detail of the cell membrane, which could open doors to new diagnostic, prevention and treatment techniques.

“We’re trying to do molecular biology with a microscope, but in order to do that, we must be able to look at things on a molecular scale,” says Jesse Aaron, postdoctoral appointee at Sandia Labs.

The cell membrane is a bustling hub of activity on a miniscule scale. While providing structure and housing the cell’s interior, the membrane regulates movement of materials in and out of the cell, controls adhesion to other objects and coordinates the cell’s communications and subsequent actions through signaling. Receptor proteins on the surface of immune cells, known as toll-like receptors (TLRs), are tasked with recognizing intruders, or antigens. The TLR4 member of this receptor family responds to certain types of bacteria by detecting lipopolysaccharides (LPS) present on their surface. TLR4 proteins then alert the cell and activate an immune response.

Using imaging techniques they developed, Sandia researchers Aaron, Jeri Timlin and Bryan Carson discovered that TLR4 proteins cluster in the membrane when confronted with LPS derived from E.coli, which increases cell signaling and response. Interestingly, LPS derived from the bacteria that cause plague, Yersinia pestis, do not cause the same effects. This could explain why some pathogens are able to thwart the human immune system.

The plague studies marked the first time such small events have been imaged and compared, the Sandia researchers said. Previously, even the most sophisticated optical microscopes could not image the cell surface with enough spatial resolution to see the earliest binding events, due to the diffraction barrier, which limits what can be resolved using visible light. 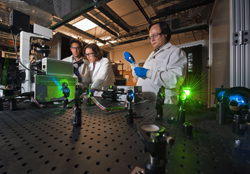 Jesse Aaron, left, Jeri Timlin, and Bryan Carson in their laboratory working with new imaging techniques to view cell-level activity with unprecedented detail. (Photo by Randy Montoya) Click on the thumbnail for a high-resolution image.

“With more traditional visualization methods, you can’t see the level of detail you need. It’s important to look at not only what’s present, but also when and where it’s present in the cell,” Timlin said.

The technique used by Timlin and Aaron builds on superresolution capabilities developed in recent years, but goes another step by adding dual-color capabilities to the relatively new stochastic optical reconstruction microscopy, or STORM. The combination enables the Sandia team to get a more complete picture by simultaneously imaging LPS and TLR4 receptors on the membrane.

“Current light microscopy capabilities are akin to looking out the window of an airplane and seeing the irrigation circles. You know that plants are there, but you can’t tell what kinds of plants they are or what shape the leaves are,” said Carson, a Sandia immunologist who was an integral part of the project. “But with this technology, it’s like zooming in and seeing the leaves and the structure of the plants. That buys you a lot in terms of understanding what’s happening within a cell and specifically how the proteins involved interact.”

In 2009, the National Institutes of Health awarded Timlin a five-year, $300,000-a-year innovation grant. Next on the team’s agenda is developing the capability to image live cells in real time using spectral Stimulated Emission Depletion, or STED. “We’re working toward using a version of superresolution that’s much more live-cell friendly, and extending that in terms of what colors are available to do multiple colors, while maintaining the live-cell friendliness. I see this as a beginning of a long development in this type of imaging technology,” Timlin said.

Potential applications likely will expand as the technology reveals previously unattainable details of cell signaling. Eventually, the Sandia team would like to be able to visualize protein/protein interactions.

“Every biological process that goes on in your body is somehow controlled by proteins forming complexes with other proteins or complexes in the membrane, so this would give you this ability to look, with high spatial resolution and multiplexed color capabilities, at four or more things in a living cell, which can’t be done very easily right now. It can be done in pieces, but we want to see the whole biological process,” Timlin said.

The technology has exciting potential in immunology and drug discovery. Improved imaging could show the mechanisms viruses use to invade cells, which might lead to drugs that would block entry. “We’re hoping to do something like label the viral particles and watch them in real time, or as close as we can to real time, in the internalization process,” Carson said. “With the superresolution technique, we can actually watch them move through the membrane and see if there are other structures being recruited by the virus to the site of internalization.”

Sandia originally developed the technology in support of its biological national security programs, but the team wants to expand the technology into other areas such as biofuels to better understand where and when different pigments are located on the membrane of oil-producing algae. This would provide valuable insight into their photosynthesis functions, which could lead to more efficient biofuel production.

“A lot of this work is in its early stages, but we’re encouraged by what we’re seeing and excited about its future potential,” Aaron said.