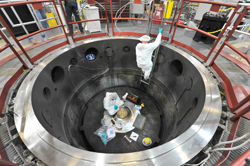 Workmen at Sandia’s Z machine test for any energy irregularities at the huge machine’s core prior to setting up for another experiment. (Photo by Randy Montoya) Click on the thumbnail for a high-resolution image.

ALBUQUERQUE, N.M. — The National Nuclear Security Administration (NNSA) today announced that researchers from Sandia and Los Alamos national laboratories have completed their second experiment in the past six months at Sandia’s Z machine to explore the properties of plutonium materials under extreme pressures and temperatures. The information is used to keep the U.S. nuclear stockpile safe, secure and effective.

The Z machine — the Earth’s most powerful and efficient laboratory radiation source — is capable of performing 200 “shots,” or experiments, every year. Experiments with plutonium require more care and are done relatively infrequently.

The March 31 experiment is a continuation of studies performed at Sandia prior to the major refurbishment of the Z machine in 2007, which increased its output of electrical energy from 18 mega amperes to 26 mega amperes. This enables Z researchers to gather data from materials subjected to conditions that more closely resemble those found in nuclear weapons, the cores of planets and stars.

“The ultrafast closure valve and containment chamber performed as expected, isolating the plutonium within the primary containment system,” said Mike Lopez, Z Operations manager.  The same arrangement was used on the earlier shot.

Said Keith Matzen, director of Sandia’s Pulsed Power Program,  “By applying lessons learned from the first plutonium experiment on the refurbished Z facility last November, our staff significantly improved the operational efficiency for this second experiment and safely provided high-quality, mission-critical data. Once again I am very proud of the Z team.”

Don Brunell, a senior technical safety adviser at the Department of Energy’s Sandia Site Office, congratulated Sandia for successfully completing the experiment while maintaining high standards of both science and safety.

“What we did was work as an integrated team with the line to accomplish the mission safely and efficiently while protecting the environment,” said former astronaut Sid Gutierrez, Sandia’s chief safety officer.

The machine uses electrical currents of about 26 million amps to reach peak X-ray emissions of 350 terawatts, an X-ray output of 2.7 megajoules and pressures greater than those at the center of the Earth.

The Z machine is part of Sandia’s Pulsed Power Program. Pulsed power is a technology that concentrates electrical energy and turns it into short pulses of enormous power, which are then used to generate X-rays. Produced in the laboratory, this controlled radiation or magnetic pressure creates conditions on a small scale similar to those caused by the detonation of nuclear weapons, which is why from its earliest days pulsed power has been used to study weapons effects.