Search and rescue volunteers from Sandia respond to wilderness misadventures

ALBUQUERQUE, N.M. — By day, Craig Tenney is a chemical engineer at Sandia National Laboratories. But sometimes as he readies for bed, he gets a call and instead finds himself on an icy trail, mere feet from a cliff high above the city in the Sandia Mountains rescuing a couple of hikers who thought they could make it to the top in tennis shoes and jeans. 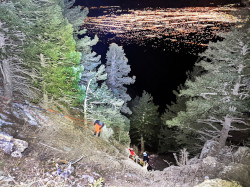 Tenney is one of a dozen Sandia volunteers who go off the beaten trail and give back to their community by participating in wilderness searches and rescues. As members of the Albuquerque Mountain Rescue Council, they use their technical expertise to solve the complex challenges involved in finding lost hikers and hoisting injured rock climbers to safety.

The Albuquerque Mountain Rescue Council is a team of first responders that gets called in when people get lost or injured in the mountains and wilderness areas near Albuquerque, and across New Mexico. About 30% of the volunteers on the team work at Sandia, including the council’s president, vice president and treasurer, and serve on the council in their off-hours.

“As far as what draws so many Sandia employees to Albuquerque Mountain Rescue, the technical expertise required to safely execute mountain rescue missions probably appeals to many of us,” said Tenney, who is the council’s president. “The people who choose to work at Sandia are already pre-disposed to thinking about risk mitigation; systems engineering; and solving complex, open-ended problems that have relatively high stakes. Plus, it’s just nice to do good things for other people.”

Tenney joined the Albuquerque Mountain Rescue Council six years ago and in February 2020, he led a rather memorable rescue. One night, two separate couples got stuck in the snow and ice about a quarter mile from the top of the La Luz Trail in the Sandia Mountains east of Albuquerque. This spot is treacherous because the trail traverses steep terrain with significant cliffs, and the afternoon sun partly melts the snow, which freezes again into ice each night. 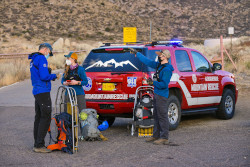 First Tenney and his fellow rescuers — including three other Sandia employees, one who was a member of Cibola Search and Rescue — reached the two couples, checked them out and began getting them warmed up. Then he scouted around and decided the best course of action was to use ropes and crampons to hike straight up to the crest of the mountain and from there to the upper terminal of the Sandia Tramway, a gondola-like tram that goes from Albuquerque to the top of the Sandia Mountains. It took two hours to go up the 200 feet to the Crest Trail at the top of the Sandia Mountains, working in four stages to protect the patients and rescuers, he said.

That same night, another group from the team, including three Sandia employees, was called in to rescue six people who got into trouble about five miles up the La Luz Trail. Everyone involved in both rescues went home cold and tired, but safe and sound.

Bill Scherzinger, the council’s treasurer and a mechanical engineer at Sandia, was introduced to the team in 1998 by Steve Attaway, another Sandia employee. One of the missions Scherzinger recalls vividly did not have a happy ending.

A young woman in her early 20s got lost while hiking Mt. Taylor about 80 miles west of Albuquerque near Grants, New Mexico, during the winter. Scherzinger and several other members of the team, including another Sandia employee, went on several searches to find her. When they came back from one search, Scherzinger noticed the woman’s parents staring at her preserved shoeprint.

“That really brought home what it is we do, when we’re out there searching for people,” Scherzinger said. “Unfortunately, we didn’t find her. Her body was found maybe six months later. Sometimes our missions don’t turn out great. But seeing her parents really drove home what we do out there, and how we’re helping people whose whole world has been thrown upside down.”

COVID-19 changes some things, but mission remains the same

Like almost every aspect of daily life, the COVID-19 pandemic has affected the team’s search and rescue missions and training. 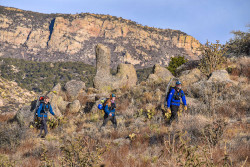 Ruzinsky, Son and Scherzinger volunteer with the Albuquerque Mountain Rescue Council to find lost hikers and rescue injured rock climbers near Albuquerque, and across New Mexico. (Photo by Randy Montoya) Click on thumbnail for high-resolution image.

The council averages about 50 missions in a year. This year, there was an unusual spring spike. In the summer there was a sizable lull in rescue missions, despite unusually packed trails and trailheads, Tenney said. “Our rescues have stayed mostly on par with past years, even though there seems to be an increased number of people out there. Perhaps those who are going out are preparing or reading up ahead of time, or are being very conservative, and are staying out of trouble.”

Before going out on a mission or taking part in a training exercise, each member takes a COVID-19 self-assessment. This includes a temperature check, reviewing other common COVID-19 symptoms and a contact-risk assessment. Of course, as a wilderness search and rescue team, all their missions take place outdoors, and the volunteers wear masks, wash their hands frequently and stay more than six feet apart whenever feasible.

In many cases, only one member approaches a patient or missing person, still keeping six feet away, Tenney said. That rescuer provides the person with a mask — if they don’t already have one — and assesses their COVID-19 risks before moving closer to provide aid, such as warmer clothes and a hot beverage or assessing and wrapping a twisted ankle.

In some situations, such as when the patient is so injured they need to be carried out on a litter, maintaining distance is not feasible. Team members also carry N95 masks, eye protection and hospital gowns they can use if they determine the patient is at a high risk of having COVID-19. 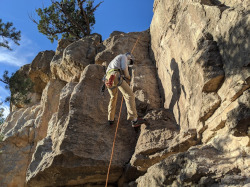 Training exercises that cannot take place online, such as practicing hoisting a patient off a ledge with ropes and pulleys, were scheduled for only five or fewer members at a time, said Shane Ruzinsky. Ruzinsky is the council’s vice president and a mechanical designer at Sandia. He was first introduced to the team on a hike when he came across a group conducting a training session.

Early in the pandemic, when the virus was poorly understood, the training exercises were scheduled about two weeks apart to reduce the risk of spreading the novel virus among the team members.

The council’s members, along with members of New Mexico’s 40 or so other search and rescue organizations, have begun receiving the COVID-19 vaccine with other first responders, Ruzinsky said.

COVID-19 has also disrupted the team’s recruitment of new members. Typically, they induct a new class of members each spring and provide three months of intense training to give them all the skills necessary to participate in rescues, Tenney said.

But, because of COVID-19, they did not train a new class of members in the spring of 2020 and plans for 2021 are still in development, said Ruzinsky, who was part of the spring 2017 class.

When normalcy returns, the only prerequisite to join the team is a willingness to put in the time to learn; and the dedication to go out on missions at any time of day or time of year. Most members also have a passion for outdoor adventure sports, such as rock climbing, hiking, backcountry skiing or others.

“I’m very fortunate to be part of such a skilled and dedicated team,” Ruzinsky said. “Typically, we get called out in difficult conditions, usually in the middle of the night, and we’re in challenging terrain. I know I can always rely on my teammates. When we go out together and help somebody and bring them back to their family, that is unbeatable.”