ALBUQUERQUE, N.M. — Along with flying cars and instantaneous teleportation, smart bridges, roads and subway lines that can send out warnings when they’re damaged are staples of futuristic transportation systems in science fiction.

Sandia National Laboratories has worked with Structural Monitoring Systems PLC, a U.K.-based manufacturer of structural health monitoring sensors, for over 15 years to turn this science fiction into science fact. They outfitted a U.S. bridge with a network of eight real-time sensors able to alert maintenance engineers when they detect a crack or when a crack reaches a length that requires repair. 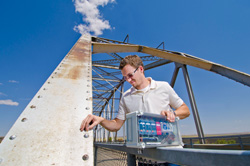 Sandia National Laboratories mechanical engineer Stephen Neidigk positions a Comparative Vacuum Monitoring sensor on a bridge. In his other hand is the control system that periodically checks the sensor and a wireless transmitting device to autonomously alert the maintenance engineers if it detects a crack. (Photo by Randy Montoya) Click on the thumbnail for a high-resolution image.

Next week, Sandia Senior Scientist Dennis Roach will present his team’s work at the ninth International Conference on Bridge Maintenance, Safety and Management. His presentation will include data on this trial bridge, a general assessment of the sensors used and his proposal for how to make structural health monitoring more routine in transportation infrastructure.

The goal of structural health monitoring is to increase supervision of critical areas, extend the lifetime of structures and ultimately reduce operating costs and improve safety. In order to assess the condition of a bridge or another kind of transportation infrastructure, sensors are mounted on the structure and their data needs to be properly analyzed.

In 2016, more than 54,000 bridges in the U.S. were classified as “structurally deficient” by the Federal Highway Administration’s National Bridge Inventory. This means about 9 percent of U.S. bridges need regular monitoring. “Areas that are difficult to access or things that are remotely located like bridges, pipelines and other critical structures present significant challenges to properly monitoring the health of the structure or equipment,” said Roach. “A network of structural health monitoring sensors could be a solution, or at least help ensure the necessary vigilance over these components.”

Recently, Sandia and Structural Monitoring Systems, which has a significant presence in North America, worked together with Delta Air Lines Inc. and the Federal Aviation Administration to get the Comparative Vacuum Monitoring sensors industry certified for crack detection on commercial aircraft. Roach’s work with structural health monitoring for commercial aircraft began in 2001 through the FAA’s Airworthiness Assurance Center, which has been operated by Sandia for the FAA since 1990.

The structural health monitoring system for the trial bridge consists of eight Comparative Vacuum Monitoring sensors, a vacuum pump to form the vacuum, a control system to turn on the vacuum pump and periodically check the sensors and a wireless transmitting device to autonomously call or text the maintenance engineers if a sensor detects a crack. The whole system is powered by a lithium ion battery, which is recharged by a solar panel.

The sensors were placed along several welds on a truss 100 feet above the deck, or flat road surface, on a suspension bridge.

The Comparative Vacuum Monitoring sensors produced by Structural Monitoring Systems are made of thin, flexible Teflon and have rows of little channels, called galleries. They can be stuck onto critical joints or welds or placed near other places cracks are likely to form. When the metal is whole, the pump is able to remove all of the air out of the galleries, forming a vacuum. When a tiny crack forms in the metal underneath the sensor, it can no longer form a vacuum, similar to how a vacuum cleaner stops working when the hose has a leak. These sensors can detect cracks smaller than the thickness of a dime.

The sensors can be produced in many different shapes, depending on the region that needs to be monitored, such as across a long weld or around a series of bolts. They can even be placed in a series in front of a tiny crack, to see whether it grows and if so, how fast. Each sensor has numerous control galleries and monitoring hardware so it can tell if there’s something wrong with the sensor or connecting tubes. Because of these control galleries, the sensors are practically foolproof.

Henry Kroker, a Structural Monitoring Systems engineer who played a key role in the bridge monitoring project, said, “Comparative Vacuum Monitoring sensors provide an elegant ‘Green-Light, Red-Light’ method for constantly surveying critical components. In many years of trial and permanent use in the aviation and now civil industries, these sensors have not produced any false calls.”

The team’s work on smart infrastructure began in 2005 through a Sandia-sponsored Laboratory Directed Research and Development project. The project explored using mounted sensors and wireless data transfer to continuously monitor a wide array of civil structures ranging from heavy mining equipment to railway systems and bridges. These sensors can monitor the health of structures and mechanical devices by detecting the presence of corrosion and cracks and even the condition of critical moving parts.

Roach and his team also use piezoelectric sensors, fiber optics and printed eddy current sensors for structural health monitoring. Printed eddy current sensors, a Sandia-patented technology, can be installed on curved surfaces and use changes in a magnetic field to detect cracks. On the other hand, a network of piezoelectric sensors can monitor a wide area instead of just a few patches. Each sensor takes turns sending out a vibration through the underlying material that the other sensors receive. Cracks or other damage within the sensor network change the “pitch” of these vibrations. However, these pitch changes are more complex than the “yes” or “no” results from the vacuum monitors. Comparative Vacuum Monitoring is ready and certified for commercial use, the other technologies are still in different stages of lab and field testing.

Tom Rice, the mechanical test engineer in charge of testing various structural health monitoring systems, said “In 15 years of testing Comparative Vacuum Monitoring sensors, they have achieved a tremendous track record for producing dependable structural health monitoring. Once they get incorporated into more systems, in areas of concern, it’s just going to make aircraft, trains and bridges safer as time goes on.”

Structural health monitoring is especially good for hard-to-reach or remote areas, but it’s not a panacea for all inspection needs, Roach said. “There’s still plenty of times when you want a human in there with a flashlight or other inspection equipment, reasoning it out.” With that caveat, he added “Structural health monitoring is only beginning to scratch the surface of the varied types of infrastructure it could be used for.”