ALBUQUERQUE, N.M. — Nine commercial aircraft flying regular routes are on the frontier of aviation safety, carrying sensors that monitor their structural health along with their routine maintenance. These flight tests are part of a Federal Aviation Administration (FAA) certification process that will make the sensors widely available to U.S. airlines. 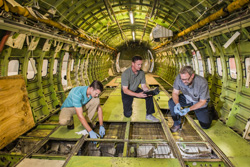 “The flight test program is underway,” said Dennis Roach, a senior scientist in Sandia National Laboratories’ Transportation, Safeguards & Surety Program who has worked in aviation safety for 25 years. “We have moved past laboratory research and are looking for certification for actual on-board usage. Our activities are proving that the sensors work on particular applications and that it is safe and reliable to use these sensor systems for routine aircraft maintenance.”

Delta Air Lines Inc. and a foreign aircraft manufacturer have partnered with Sandia researchers in two separate programs to install about 100 sensors on their commercial aircraft. These teams worked together to provide the installation procedures for technicians and now oversee monitoring of the in-flight tests.

The flight tests complement laboratory performance testing at Sandia to provide the critical step in a decade-long journey to enhance airline safety through a more comprehensive program of Structural Health Monitoring. SHM uses nondestructive inspection principles — technologies that examine materials for damage without affecting their usefulness — and built-in sensors that automatically and remotely assess an aircraft’s structural condition in real time and signal the need for maintenance.

Roach said the goal of monitoring the sensors installed on the aircraft is to accumulate successful flight history to show that the sensors can sustain the operating environment, while providing the proper signals for flaw detection.

SHM eventually could help airlines save money by basing maintenance on the actual condition of the aircraft, rather than fixed schedules and inspection routines that might not be necessary, and thereby reduce airplanes’ downtimes, Roach said.

The team said so far, sensors installed on the aircraft are working as expected.

Next year, Sandia intends to present the flight and laboratory test results to the FAA for approval and certification. Should the FAA approve the sensors, they would be available for specific applications across the entire airline industry and the process for certifying future applications should be more efficient because of the research being conducted now.

In September, a team from the Airworthiness Assurance Nondestructive Inspection Validation Center (AANC) operated by Sandia for the FAA received the 2014 Airlines for America Nondestructive Testing Better Way Award for establishing the sensitivity, durability and repeatability of applying SHM solutions on commercial aircraft. The award honored team members from the FAA, Delta, Boeing Co., Structural Monitoring Systems Inc. and Canadian-based Anodyne Electronics Manufacturing Corp. The award recognizes the year’s most outstanding innovation for aircraft maintenance based on technology advancement and cost effectiveness.

Two SHM systems reach maturity for use on regular flights

Sandia began its work in aviation safety in 1991 when the FAA, in response to a number of aviation incidents, increased its research efforts to improve inspection, maintenance and repair of commercial aircraft. Among the projects to improve aviation safety, the FAA created the AANC, operated by Sandia, to conduct research into nondestructive inspection (NDI), advanced materials, engines, structural integrity and a wide range of other airworthiness assurance areas.

The center provides a way to develop, evaluate and bring new aircraft technologies to the airline industry, Roach said. “We work to make the technology viable and often focus on that last phase of technology validation and certification.”

Both of these on-board sensors must meet the same performance and reliability standards as those required for current maintenance inspections, Roach said. “The SHM systems also help eliminate some of the concerns about human factors associated with manually-deployed NDI,” he said. “You have the sensor in place, you know it works and it’s giving you a proper signal, whereas an inspector must manually orient the inspection probe properly each time and there are always concerns about human vigilance when inspections become time-consuming or tedious.” 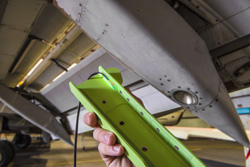 The Structural Health Monitoring sensors are custom built to fit an aircraft’s parts. They can be mounted in hard-to-reach areas of an aircraft so that mechanics can plug in to acquire data without the time, cost and risk of removing parts from the aircraft. (Photo by Randy Montoya) Click on the thumbnail for a high-resolution image.

The sensors are custom built to fit an aircraft’s parts, they are verified to be working before they are sealed inside the aircraft and the readouts provide inspectors with a “pass” or “fail” decision so the results can’t be misinterpreted, the researchers said.

Field tests bridge gap from lab to routine use in aircraft

The field tests have helped fine tune the sensors, so they can withstand the harsh environments aircraft fly in and the environment aircraft mechanics work in, neither of which is as pristine as the laboratories where the sensors were initially tested.

For example, field testing showed that mechanics working in the cramped bowels of an aircraft couldn’t see well enough to connect the sensors’ tubes together by hand, Neidigk said. So the team designed snap-clip type connectors for the CVM sensors, like those used to plug a telephone landline into a wall outlet.

“With the snap-click connectors, they are able to feel them click together, which is easier than the previous method of connecting tiny tubes individually by hand,” Neidigk said.

Complementing the in-flight tests, Sandia is looking at the sensors’ ability to detect cracks and how well they perform in extreme environmental conditions.

In the laboratory, Sandia engineer Tom Rice breaks things for a living, but that’s not as easy as it sounds. The cracks he “grows” have to represent cracks found on an airplane. So, for example, he places a pale green wing box fitting on a load frame that mimics the stress conditions the part would experience on an aircraft. After about four hours of accelerated fatigue cycles, a crack begins to show.

“We literally have to grow the crack enough to where it stays open (without the load on it), so our sensors can detect the crack when the aircraft is in an unloaded state in the maintenance hangar,” Rice explained.

Once the sensors detect an array of cracks, Sandia assembles various test scenarios and collects the data to calculate the statistical probability of detection for cracks of various lengths, typically fractions of inches.

In hundreds of laboratory tests, the sensors have never issued a false call, Rice said.

If flight tests verify that the sensors can be used to help monitor airliners’ structural health, the Sandia researchers hope to see a more comprehensive SHM program follow.

In addition to safety enhancement, SHM would save the airline industry time and money, particularly if sensors are mounted in hard-to-reach areas and used widely throughout an aircraft, Roach said.

With today’s routine maintenance, inspectors often need to remove a cabin’s interior seats or galleys to conduct inspections. But with the on-board sensors mounted in place, the mechanics can plug in from a convenient location to acquire the sensor data without the time and cost of removing items, Roach said. Such part removal also introduces the possibility of damaging the structure during disassembly.

Researchers hope SHM eventually will permit the real-time condition of the aircraft to dictate maintenance. “The ultimate goal is to monitor it in-flight and have it tell you ‘I need some attention, I’ve got a problem here.’ So you do condition-based maintenance rather than time-based maintenance,” Roach said. “That’s downstream a ways, but these are all building blocks working toward that.”

Rice adds that with SHM, abnormal problems that show up prior to scheduled maintenance would be detected with real-time sensors. “With condition-based maintenance, you could find damage earlier than normal,” he said. “It’s rare that it happens, but it could.”

Such early damage detection and repairs provided by SHM also are cost-effective because they reduce the need for subsequent major repairs, Roach said.