ALBUQUERQUE, N.M. — Experimenting at 4.1 million degrees Fahrenheit, physicists at Sandia National Laboratories’ Z machine have found that an astronomical model — used for 40 years to predict the sun’s behavior as well as the life and death of stars — underestimates the energy blockage caused by free-floating iron atoms, a major player in those processes. 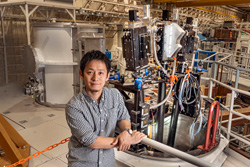 Sandia National Laboratories researcher Taisuke Nagayama in a quiet moment at Sandia’s Z machine, which reaches the temperature of stars. (Photograph by Randy Montoya). Click on the thumbnail for a high-resolution image.

The blockage effect, called opacity, is an element’s natural resistance to energy passing through it, similar to an opaque window’s resistance to the passage of light.

“By observing real-world discrepancies between theory and our experiments at Z, we were able to identify weaknesses in opacity figures inserted into solar models,” said Taisuke Nagayama, lead author on the Sandia groups’ latest publication in Physical Review Letters.

The good news is that Sandia’s experimental opacity measurements can help bloodlessly resolve a major discrepancy in how the widely used Standard Solar Model uses the composition of the sun to predict the behavior of stars.

Until 2005, the SSM’s multiplication of the amount of each element present by its opacity accounted for the observed temperature structure of the sun. But new astrophysical observations and more sophisticated physics then led astronomers to revise their estimates of the sun’s composition. Unfortunately, these new estimates, inserted into the model and multiplied by their opacities, did not account for the sun’s temperature. There were three possibilities: either the new composition observations were inaccurate, or the venerated SSM was wrong, or the theoretically derived opacities of elements were incorrect.

The best resolution clearly would come from experiments performed at the same temperatures as those found in the sun’s interior.

More than a decade ago, Sandia researchers began taking pieces of iron, each smaller than a dime, and inserting them into the target area of Z. When Z fired, the extreme heat changed the solid into plasma (a gas) as it exists in the sun, but only for nanoseconds. That was long enough, however, for researchers to send an energy wave through each sample and measure how much got through. The idea was to create, for the first time, laboratory-derived measures of the opacity of iron at the temperature of the sun to learn whether it agreed with the theoretical figures used in Standard Solar Model calculations.

Increasing the opacity of iron to the extent demonstrated by Z in multiple independent experiments removed about half the discrepancy between computed and actual solar temperature, Nagayama said.

“Astronomers are happy with us because we’re saying it’s the opacity figures that may be wrong,” said paper author and Sandia researcher Jim Bailey. “Then they don’t have to come up with a new model and redo all their calculations using the sun as a benchmark for predicting the evolution of stars.”

That’s because astronomers use the sun’s composition as a reference for the universe.

“Decreasing the oxygen amount in the sun by 50% is equivalent to halving the amount of water (H2O) in the universe,” said Bailey. “There are many exoplanets orbiting around sun-like stars; revising the understanding of our sun would also have significant impact on understanding those exoplanets.

“The astronomers liked the opacity supposition the best, and that’s what we’re finding so far.”

On the same test, Sandia also measured the opacities of chromium and nickel under the same conditions used on iron. The idea was to use those elements — respectively smaller and larger than iron, but adjacent to iron in the periodic table — as though iron were being tested closer and farther from the sun’s core. Surprisingly, those elements produced experimental opacity results basically in accord with model predictions at some photon energies. Still, they differed from opacity predictions at particular wavelengths — further grist for model revision.

“Our work over the last five years has been focused on resolving the discrepancies,” said Nagayama.  “And yet the new results mean new science may be necessary to account for them.”

To explain new experimental results, physicists are examining new models. One, called two-photon opacity, explores the idea that an element may absorb two photons at a time instead of the one thought standard.

“If this multi-photon absorption is considered in the model, it would enhance the calculated iron opacity and may resolve the discrepancy,” he said.

If correct, the new physics model must calculate the opacity increase only for iron, since model and data already agree for chromium and nickel.

Other experimental limitations include the fact that little is known about the structure of the sun inside particular distances from the sun’s center.

“Is the discrepancy worse if you go even deeper in the sun?” Nagayama asked. “We don’t know. It all depends on what’s causing the discrepancy. We may find that the discrepancy is even worse in the solar core, or the problem may be isolated to the region around 0.7 solar radii, the distance which matches the energies at which these experiments were performed.”

Answering those questions should lead to a more accurate model, he said.

“Experiments of hot dense plasma are challenging enough that we should not rule out the possibility of error,” Nagayama said. “And the science impact is enormous — this obligates us to continue examining the experiment’s validity.”