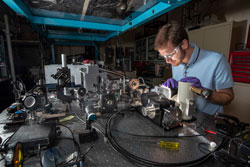 Sandia National Laboratories optical engineer Michael Goldflam sets up equipment to load and characterize a new nanoantenna-enabled detector. (Photo by Randy Montoya) Click on the thumbnail for a high-resolution image.

In a Laboratory Directed Research and Development project, a team of researchers developed a nanoantenna-enabled detector that can boost the signal of a thermal infrared camera by up to three times and improve image quality by reducing dark current, a major component of image noise, by 10 to 100 times.

Thermal infrared cameras and sensors have existed for 50 years, but the traditional design of the detector that sits behind the camera lens or a sensor’s optical system seems to be reaching its performance limits, said David Peters, a Sandia manager and nanoantenna project lead.

He said improved sensitivity in infrared detectors, beyond what the typical design can deliver, is important for both Sandia’s national security work and for other uses, such as astronomical research.

The sensitivity and image quality of an infrared detector usually depends on a thick layer of detector material that absorbs incoming heat and turns it into an electrical signal that can be collected and turned into an image. The thickness of the detector layer determines how much heat can be absorbed and read by the camera, but thick layers also have drawbacks. 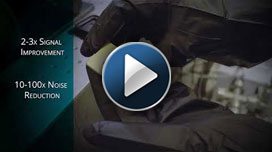 The research team developed a new detector design that breaks away from relying on thick layers and instead uses a subwavelength nanoantenna, a patterned array of gold square or cross shapes, to concentrate the light on a thinner layer of detector material. This design uses just a fraction of a micron of detector material, whereas traditional thermal infrared detectors have a thickness of 5 to 10 microns. A human hair is about 75 microns in width.

The nanoantenna-enhanced design helps detectors see more than 50% of an object’s infrared radiation while also reducing image distortion caused by dark current, whereas current technology can only see about 25% of infrared radiation. It also allows for the invention of new detector concepts that are not possible with existing technology.

“For example, with nanoantennas, it’s possible to dramatically expand the amount of information acquired in an image by exquisitely controlling the spectral response at the pixel level,” Peters said. 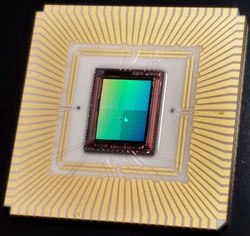 From national lab to industry

“It was not a given that this was going to work, so that’s why Sandia took it on,” Peters said. “Now, we are to the point where we have proven this concept and this technology is ready to be commercialized. This concept can be applied to different detector types, so there’s an opportunity for existing manufacturers to integrate this new technology with their existing detectors.”

Peters said Sandia is pursuing leads to establish a Collaborative Research and Development Agreement to start transferring the technology to industry.

“This project is a perfect example of how a national lab can prove a concept and then spin it off to industry where it can be developed further,” Peters said.