ALBUQUERQUE, N.M. — Homeowners and businesses may now have an easier time getting solar panels on rooftops thanks to software developed at Sandia.

The new software can run a detailed, second-by-second simulation, known as quasi-static time series analysis, that shows utility companies how rooftop solar panels at a specific house or business would interact with a local electrical grid throughout the year. 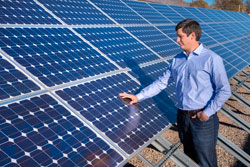 Matthew Reno, a Sandia National Laboratories engineer, helped develop new software that can perform quasi-static time series analysis to show how rooftop solar panels interact with the electrical grid throughout the year. (Photo by Randy Montoya) Click on the thumbnail for a high-resolution image.

Utility companies need the analysis because they must deliver electricity at the standard voltage used to run everything from refrigerators to phone chargers. Large amounts of solar generation in one section of a city can lead to extreme voltage fluctuations, which can damage household electronics.

This type of grid analysis hasn’t been practical outside of research settings, until now, because previous models took days to run a single scenario. The new simulations are more detailed than those used by utility companies, and Sandia researchers hope they will result in more solar panel installations.

“When installing new solar panels on the grid, utility companies will analyze how a new system interacts with the grid, typically by doing a snapshot, power-flow simulation to determine if the impacts will be OK or not,” said Sandia engineer Matthew Reno. “However, doing a snapshot of one instance in time is conservative because of the uncertainty about impacts that happen at various times on solar panels, such as the weather. This can lead to increased connection costs or homeowners living in parts of the city having unnecessarily low limits for adding solar panels, especially in sunny states.”

“The project tackled four main areas to make time series analysis faster — with the idea that each of the four areas was developed independently — and then they were combined,” Reno said. “For example, if each method makes the analysis 10 times faster, when we combine two methods, it could be 100 times faster.”

An analysis now runs 1,000 times faster than two years ago, Reno said. The software can take a simulation that used to take 36 hours and complete it in less than five minutes on a standard desktop computer. 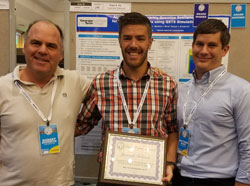 Sandia National Laboratories engineers Robert Broderick, left, and Matthew Reno, right, in collaboration with Jeremiah Deboever, center, from Georgia Tech, present their research on quantization methods to speed up quasi-static time series analysis at an Institute of Electrical and Electronics Engineers meeting. (Photo courtesy of Sandia National Laboratories) Click on the thumbnail for a high-resolution image.

Simulating a year on the grid

The team first considered how to reduce how often the electric grid power flow had to be simulated over time. Instead of simulating each second of the year individually, the software moves through the simulated year at a varied pace, taking into account whether it’s night or day or likely to be cloudy or sunny at that time of year.

“You can jump through time faster at some points and put the computational effort where it is most needed, using event-based simulation or variable time-step,” Reno said. “During cloudy periods with varying amounts of sunlight, the simulation slows down and looks at the impact second by second. When there is low variability, like at night when everything is fairly stable, the simulation can jump forward with larger time steps, making the program more efficient.”

The second part of the project focused on making the individual simulations faster by updating the formulas used to calculate the power flow. The team worked with the developers of the most commonly used commercial and open-source electric distribution system software to improve input and output, memory management and algorithms for large datasets.

The third challenge focused on reducing the complexity of the power-grid model the software uses while maintaining its accuracy. The smaller, more efficient model helps the software solve problems faster by focusing its analysis on critical parts of the grid.

The fourth part of the project focused on changing how a standard business computer runs the analysis to ensure all the processing cores are used.

“In quasi-static time series analysis, each second is dependent on the one that came before, which means everything had to be done sequentially, on a single processor, on a single core,” Reno said. “Your desktop computer could have seven other cores sitting there doing nothing while a single core performed the simulation for the entire year by itself.”

The new software separates parts of the year or parts of the grid, assigns them to each of the available computing cores and runs them in parallel.

While the focus of the project has been on supporting rooftop solar, Reno said the new software also can evaluate new technology and smart grid controls.

“As we look to the future with new smart grid applications and controls, utility companies are going to have continued need to use time-series analysis to see how new electric car charging will impact neighborhoods, investigate the best energy storage controls and applications or determine how smart home controls, like thermostats and lights, can benefit their grids,” Reno said. “In order to understand the new benefits and controllability of the smart grid, these companies will have to be able to simulate it first.”

The team’s published more than 30 papers, and the improvements are being shared with utilities, universities and other researchers in several ways. CYME International is adding components of the code directly into its commercial software, and improved timeseries analysis tools have been included into the newest versions of EPRI’s OpenDSS Distribution System Simulator and in Sandia’s GridPV MATLAB Toolbox.