Cracking the code to soot formation

LIVERMORE, Calif. — The longstanding mystery of soot formation, which combustion scientists have been trying to explain for decades, appears to be finally solved, thanks to research led by Sandia National Laboratories. 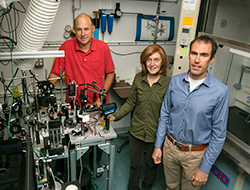 Soot is ubiquitous and has large detrimental effects on human health, agriculture, energy-consumption efficiency, climate and air quality. Responsible for significantly increased rates of cardiovascular and pulmonary diseases and associated deaths, soot also contributes to millions of deaths worldwide annually, largely from indoor cooking and heating in developing nations. It leads to tens of thousands of deaths in the U.S. every year, predominantly from human caused, or anthropogenic, emissions to the atmosphere. In the atmosphere, emissions of soot are known as black carbon.

“By understanding soot formation, we have a better chance of being able to reduce its dangerous emissions from engines, forest fires and cook stoves and control its production and characteristics during industrial processes,” said Sandia researcher Hope Michelsen, adding that everyone knows what soot is, but nobody has been able to explain how gaseous fuel molecules become soot particles.

She said soot formation turns out to be very different from the typical process of gas molecules condensing into a particle, instead, requiring fast chemical reactions rather than condensation.

The solution also can apply to other high-temperature conditions, such as interstellar space, where large quantities of carbon-dust particles are formed, she said.

The work was funded by the Department of Energy’s Office of Science.

“The work represents an enormous scientific success as a result of years of support for focused, systematic work on developing a fundamental understanding of high-temperature hydrocarbon chemistry,” said Michelsen. 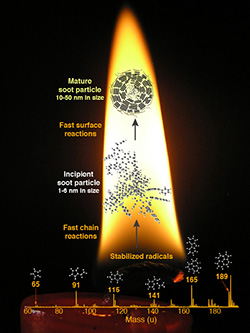 Sandia National Laboratories scientists have discovered a mechanism for soot formation, solving a longstanding scientific mystery. In this image of a candle flame, the colors are from hot soot luminescence. The mass spectrum at the bottom shows the peaks for the radicals that drive reaction. The incipient soot particle shown between the two arrows is the cluster that marks a transition to the condensed phase. Fast reactions grow the particle shown at the top of the flame. (nm = nanometer = 10-9 meters) (Image courtesy of Hope Michelsen). Click on the thumbnail for a high-resolution image.

Soot is formed during the combustion of hydrocarbon fuels, such as oil, natural gas and wood. Although it has detrimental health and environmental effects, soot is extremely important to many industrial processes, such as boiler performance, glass production and carbon-black generation for rubber-product reinforcement and pigments.

Despite the ubiquity and importance of soot, the basic chemistry explaining why the molecules in a flame stick together at high temperatures and form particles has remained a scientific puzzle until now, said Michelsen.

In its final form, soot is a solid very similar to graphite, but it is initially formed from gaseous hydrocarbons. Experimental evidence indicates that it transitions from a gas to a liquid before it becomes a solid. Scientists have been trying for decades to explain that transition. “Most people are familiar with how the gas phase of water — water vapor — condenses into droplets when it cools. Cooling it further will turn it into ice, the solid phase of water. Soot is different,” said Michelsen.

Soot particles are formed when gaseous molecules are heated to high temperatures, and they don’t easily turn back to gaseous molecules the way water droplets do when they are heated up. Strong chemical bonds hold soot particles together. “Making soot is more like baking a cake than it is like condensing water. Heating liquid cake batter to high temperatures turns it into a stable solid form,” explained Michelsen.

Scientists have long suspected that chemical bonds must be formed to make soot. However, soot formation is fast, and researchers did not understand how the required chemical bonds could form so quickly. To make the problem even more difficult, researchers were not even sure which gas-phase molecules were involved in producing soot.

“It’s very difficult to make measurements in a flame,” said Michelsen, “and, without measurements of the participating molecular species, it’s like trying to figure out how a cake is made without knowing the ingredients.”

The key to soot formation, it turns out, is resonance-stabilized radicals, said Johansson. In general, molecules that are radicals have unpaired electrons that they want to share, which makes them reactive. But, unlike most radicals, these resonance-stabilized radicals have unpaired electrons that participate in other bonds in the molecule. Sharing electron density between the unpaired electrons and other bonds in the molecule makes these radicals more stable than other radicals, but, nevertheless, they are more reactive than most of the other large molecules that form soot. Measurements conducted at the Advanced Light Source, a DOE Office of Science user facility at the Lawrence Berkeley Lab, showed a sequence of these radical species in all the flames studied. Michelsen said other researchers had seen these radicals and thought they might be involved in soot formation, but there didn’t seem to be enough of them to be the main driver.

“We figured out that these radicals can start a chain reaction,” said Michelsen.

When these radicals react with other molecules, they can easily form new resonance-stabilized radicals. In the process, they react with other gaseous hydrocarbons and keep growing, regenerating radicals as part of the growing particle.

Johansson explained, “We performed calculations to demonstrate that this process should happen quickly.”

“It’s really pretty simple, well … once you know the answer,” Michelsen said. “The chemical mechanism is relevant to a lot of high-temperature processes, including the formation of interstellar-dust particles, which permeate our galaxy. We are very excited about having unlocked the mystery of soot formation and the creation of carbon particles that are currently overwhelming some parts of the world as a result of forest fires that can have such a devastating effect on human health.”

Massachusetts Institute of Technology professor William Green said it has long been speculated that pathways involving resonantly-stabilized radicals might be important in polycyclic aromatic hydrocarbon (PAH) and soot formation, since the known reactions are not fast enough to explain the rapid formation of soot.

“Indeed a few specific reactions of resonantly-stabilized radicals leading to PAH are known, but until now no one has presented a convincing general mechanism supported by experimental observations,” Green said. “I look forward to incorporating these newly discovered reaction pathways into a comprehensive PAH formation mechanism to determine the range of reaction conditions where these newly discovered pathways are important.”