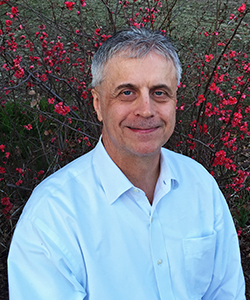 The award’s previous recipients “are a who’s who of the leaders in pulsed power science and technology,” said Duane Dimos, former director of Sandia’s Pulsed Power Sciences Center.

Said Stygar, “I’m completely humbled by the award, and hope I can live up to it.”

Erwin Otto Marx was a German electrical engineer who in 1924 invented the Marx generator, a device that produces high-voltage electrical pulses that power huge machines like Sandia’s Z accelerator.

The award includes an invitation for Stygar to give a plenary presentation in early June at the 20th IEEE Pulsed Power Conference in Austin, Texas.

In addition to his many highly cited technical papers, Stygar was praised by the selection committee as contributing “more than any single individual to the successful operation of [Sandia’s Z] facilities at peak electrical powers and peak reliability over the period of 1996-2014.”

In addition, Stygar’s “pulsed power research efforts over the last 33 years culminated in his invention of a new petawatt-class pulsed-power-accelerator architecture, which has been patented and is highly cited.”

The award credits Stygar as “the principal designer for the vacuum power flow section of the Z and ZR facility, the world’s most powerful laboratory pulsed-power generator.” ZR is the formal name given to a renovation of the Z machine, completed in 2007, which increased its current from 18 million to 27 million amperes. The machine is still known as Z.

Additionally, Stygar has made “seminal contributions to the physics and technology of superpower pulsed-power generators and to the realization of the Z and ZR accelerators as precision scientific instruments, contributing to a revolution in pulsed-power-driven high-energy-density-physics experiments.”

Said Stygar, “I feel in fact that the award actually belongs to the extremely talented teams of world-class scientists, engineers and technologists with whom I’ve been extremely fortunate to serve. They led the international Z-pinch program for three decades, and gave me — and hundreds of other scientists — the opportunity to do challenging and critical work in the service of national security.”