ALBUQUERQUE, N.M. — Almost every morning on her way to work, Theresa Rolfe drives past homeless people outside a fast food restaurant, and the sight takes her back to a time when her son could have been among them.

It wasn’t too long ago that Rolfe, an emergency management employee at Sandia National Laboratories, cried all night wondering why he left a detoxification facility with nothing more than two guys and an extra pair of underwear. He’d been to drug rehabilitation and relapsed, and for a while, his location was a mystery.

From the day she found out he was addicted to heroin until she found online support groups filled with others dealing with similar issues, she said she felt alone. Her son is clean and sober now, and she has others she can talk to. However, because she doesn’t want others to experience the same dark roads, she formed a support group at Sandia. 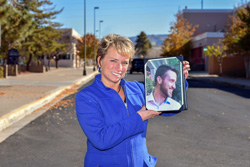 Sandia National Laboratories emergency management employee Theresa Rolfe holds a photo of her son Ted Benoit. Rolfe started the Family and Friends of Addicts Support Group at Sandia to give employees a place to share what they’re going through. Her son was addicted to heroin and now works full-time at a recovery center in Connecticut where he helps men with drug and alcohol addiction. (Photo by Randy Montoya)

The Family and Friends of Addicts Support Group meets twice a month during the lunch hour to discuss what members are going through. Rolfe’s son went through rehabilitation twice and has been doing well for more than a year, but she knows others at the labs are struggling.

“I felt there was a need for people not to be ashamed anymore because when you’re ashamed, if you hide it away, it can’t get better,” Rolfe said. “I think for things to get better, you’ve got to take the issue out of the darkness and put it into the light.”

Rolfe’s son now works full-time helping other men through drug and alcohol addiction at High Watch Recovery Center in Connecticut, the same facility that helped him get clean. Rolfe is very proud of where he is now.

“I thought the support group was such a great idea,” Rynes said. “Sadly, nobody is completely immune to this.”

Prior to the Family and Friends of Addicts Support Group, groups for grieving employees and caregivers were already established at Sandia by other employees. Staff can also reach out to counselors for individual help with anxiety, depression, marital issues and workplace issues, and counselors can guide them to long-term therapy if needed.

It’s common in the workplace for people to keep quiet about struggles with family and friends, and at Sandia, there can be an added pressure if employees worry about losing security clearances, which are required for most jobs at the labs.

“No one wants to be viewed in a less-than-perfect light,” Rolfe said. “People will always say the good things. Your son is exceeding, your daughter is valedictorian. My son’s a drug addict. I knew there was a risk putting my name out there, but I didn’t care. This is way more important. If somebody wants to judge me, or look down on me, or more importantly my son, that’s not my problem.”

Sandia requires self-reporting of drug abuse and employees are also subject to random drug screenings, but they won’t lose clearances based on their family or friends’ behavior.

‘A phone call can wreck your day’

Productivity went downhill when engineer Ian Young discovered his dad used cocaine and methamphetamines, and the ups and downs continue to come and go. He always knows when his dad isn’t doing well when collection calls come in, or when he receives another driver’s license for his dad in the mail.

“He’s constantly losing his wallet and license and everything when he’s not doing well,” Young said. “You can get to the state where a phone call can wreck your day.”

Young and Rolfe both said even when things are going well, it’s a state of fragile calm.

“Every time my phone rings, I look at it just to make sure it’s not my son and if it is, I answer right away because I think, ‘Are you OK?’” Rolfe said. “That’s all stuff I’ve got to get over.”

Group gives people a place where others ‘get it’

If group attendees don’t feel like talking during the meetings, Rolfe comes prepared with topics related to drug addiction. She knows numbers and statistics, has advice about finding good rehabilitation facilities and learns about events that could be helpful for those in the group.

Young said the support group gives attendees a place to connect with others who understand drug issues more than friends and co-workers.

Rynes said one of the benefits is not having to start from scratch.

“People just get it,” she said. “When you’re in a supportive group, everyone is sort of nodding their heads and saying, ‘I know.’”

Rolfe said she hopes to help family members by discussing the problem of addiction.

“Not acknowledging it won’t make it go away. In fact, that’s probably the worst thing we can do,” she said. “An addict is somebody’s son, daughter, brother, sister, parent and friend. There’s somebody underneath the addiction. They’re there. And I never want somebody to feel so alone and desperate as I have felt.”