Experts from Sandia, other national labs keep the public safe

Thirty-two such accidents have occurred since the 1950s, so the Accident Response Group was created about five decades ago to provide technical expertise in assessing and safely resolving nuclear weapons accidents. 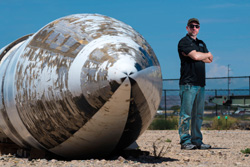 Ryan Kristensen, a manager in Sandia National Laboratories’ mission assurance center, stands next to a Polaris missile at the National Museum of Nuclear Science and History. As a highly skilled engineer and recent addition to the Accident Response Group, Kristensen brings a fresh perspective to group, his colleagues say. (Photo by Randy Montoya) Click on the thumbnail for a high-resolution image.

“With the resources the Department of Energy can bring in the form of ARG, rest assured there will be a safe weapon recovery,” said Harry Cincotta, ARG project lead at Sandia National Laboratories. “If ARG does have to respond, we are ready, and we’re bringing the best scientific minds in nuclear weapons on the planet with us.”

Although U.S. nuclear weapons are managed with great care in maintenance and transportation, ARG’s manager Bill Beenau said ARG is prepared to respond in the event of any extraordinary circumstance.

ARG leadership recently celebrated the realignment of the ARG program into the Military Liaison Department. The realignment will build off of the existing relationships the Military Liaison Department has with the Department of Defense, and enhance ARG’s existing technical relationships with DOD maintenance and explosive ordnance disposal groups. Ultimately, this will improve awareness of the technical expertise ARG brings to the table, should an accident happen.

“Our weapons are the safest in the world,” said Dan Summers, a longtime ARG volunteer who has focused on nuclear weapons surety for decades. “They have tremendous safety features, and we consider a variety of accident conditions when designing and testing them, including fire, crushing damage, even weather events.”

ARG brings together diverse experts in nuclear weapons and health and safety from Sandia, Lawrence Livermore and Los Alamos national laboratories as well as the Remote Sensing Laboratory and Pantex Plant. Each facility has its own area of expertise. The physics labs — Los Alamos and Lawrence Livermore — focus on the nuclear package. As the nuclear engineering lab, Sandia focuses on the whole weapon, Beenau said.

ARG is a group of volunteer emergency responders, like a volunteer fire department made up of experts at the top of their field. Volunteers are on call on a rotating basis for the initial phase of response. If necessary for a safe recovery, ARG can expand to a team of about 50 experts for round-the-clock field operations.

ARG is one of many National Nuclear Security Administration nuclear and radiological emergency response groups. Sandia is also heavily involved in the Radiological Assistance Program, which shares a lot of experts and expertise with ARG.

Experts from across the nuclear enterprise need to be nominated by current members of ARG or weapons systems program leadership before they can volunteer. “We want the folks who handle the routine technical challenges of the nuclear weapon systems to be a part of ARG,” said Cincotta.

Ryan Kristensen was nominated for ARG about four years ago. A systems engineer, he started working with some ARG volunteers on a specific project. Through them he learned about ARG’s critical mission. Beenau said, “Ryan Kristensen is a great example of what ARG is becoming. He is a highly skilled engineer and is bringing a new, fresh perspective to ARG.”

For Kristensen, the most fulfilling part of volunteering for ARG is working as a team in the field during exercises. “It’s great when you can come together and achieve a difficult task. It’s not often you can work with a team like that and know you’ve made a difference,” he said.

ARG regularly participates in emergency exercises designed to test everything from equipment and deployment times to collaboration with other agencies, such as the DOD and FBI. These exercises involve very realistic models but no actual nuclear weapons.

“During an exercise or real-world event, we’re not Sandia, Los Alamos or Lawrence Livermore; we’re ARG,” said Kristensen. The boundaries between DOD and DOE responders relax as well, Kristensen said. “Explosive Ordnance Disposal are the hands-on guys, and we ensure what they do is safe for them and the weapon.”

These exercises test the ARG responders’ limits too. During an exercise in 2005, Summers had to splice a damaged fiber optic cable in winds over 75 mph, while wearing a full protective suit, in order to restore ARG’s secure communications system. “If you don’t practice for real, you’re never going to be ready,” said Summers.

Kristensen thinks the post-exercise debrief and celebration is also an important part of building bonds between responders from across the nuclear enterprise and agencies for the next exercise or real-world event.

In addition to the field responders, ARG also provides technical support in the form of the Home Team, a collaborative network with nodes across the nuclear enterprise and at NNSA headquarters. They serve as a conduit to the enterprise’s technical experts, which can be tailored to the exact weapon system and the precise damage caused by the accident.

“The ARG responders in the field have secure, reliable, dedicated, high-speed communications with the Home Team and the precise experts needed,” said Brenda Townsend, a member of Sandia’s Home Team for 15 years. This communication allows ARG to deploy far fewer people to the site of an accident, which is cost effective.

In addition to the weapons systems experts, the Home Team includes a team responsible for double-checking the weapon recovery plans, a team to ensure the communication networks work effectively and a team that handles the logistics of getting the ARG responders to the site of the accident and making sure they have everything they need when they arrive, such as hotel rooms.

Townsend primarily serves as a communications specialist, but she’s also responsible for staffing the communications and logistics positions. She said, “I really believe in ARG’s mission. It gives me satisfaction to provide the substructure to allow ARG to do its job efficiently and effectively.”

Sandia’s Home Team is the lead Home Team and can coordinate requests for information from the field or headquarters to the other Home Teams with the right expertise. The Home Team uses secure phone lines, video conferencing and even instant messaging to interface with each other, responders in the field and the DOD.

This secure communication is aided by a portable integrated video system, or PIVS. This secure fiber optic-based communications system can carry video and audio from the accident area to the Home Teams. The volunteers responsible for setting up the system and hauling the 85-pound reels of fiber optic cables are colorfully called PIVS mules. Cincotta was a PIVS mule during his first exercise, almost 25 years ago.

“Once I got out to the exercise, the importance of it got ahold of me. The important mission either resonates with you as a scientist or engineer or it doesn’t. And it certainly resonated with me,” said Cincotta. “Every accident situation is unique so every response is somewhat unique, so it’s intellectually stimulating too.”