ALBUQUERQUE, N.M. — The $2.3 billion worth of economic activity generated by the Sandia Science & Technology Park (SS&TP) since it was established in 1998 has produced more than $89 million in tax revenue for the state of New Mexico and $12.9 million for the city of Albuquerque in the past 16 years. That’s the conclusion of a new report by the Mid-Region Council of Governments (MRCOG).

And jobs associated with the research park, which houses private companies and some Sandia National Laboratories sites in a collaborative environment, have paid out $3.8 billion in wages, giving the local economy a major boost, the report said. 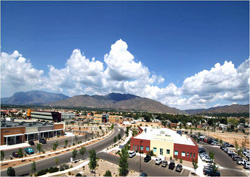 The Sandia Science & Technology Park is a 300-acre business and research center located next to Sandia National Laboratories and Kirtland Air Force Base. Park companies can collaborate more easily with scientists and engineers from Sandia and the Air Force Research Laboratory. (Photo courtesy of Sandia Science & Technology Park) Click on the thumbnail for a high-resolution image.

Albuquerque Mayor Richard Berry announced the report’s findings Wednesday at Emcore Corp. in the 300-acre master-planned SS&TP established in May 1998.

Berry said the park “is a great example of a successful public-private partnership. Its impact on local and regional economic development is a reflection of Albuquerque’s collaborative efforts that ultimately result in companies and jobs for our residents. The city of Albuquerque is honored to be an active partner in the SS&TP.”

“The Sandia Science & Technology Park has been instrumental in creating economic stability within the region,” Bernalillo County Commissioner Maggie Hart Stebbins said before the announcement. “Through ups and downs in the economy, the park continues to contribute to our nation through innovation and technology, and to our region through increased local investment, area revitalization and jobs that provide opportunities for our residents. Bernalillo County is proud to be a partner in this effort.”

MRCOG assessed the research park’s economic impact on the local and state economy from its inception through the end of 2013. The report also measured the number of Albuquerque-area jobs created in the park, economic activity in the community, and wage and salary levels.

“We are fortunate to have the Sandia Science & Technology Park in our community, building on our regional strengths in innovation, ingenuity and entrepreneurship; providing opportunities for high wage jobs; and contributing to the goal of long-term economic prosperity,” said Dewey Cave, MRCOG’s executive director.

“The park plays a critical role in our economy,” said Jackie Kerby Moore, executive director of the SS&TP. “We continue to contribute to an increase in tax revenues and wage impacts despite a tough economy.”

The report found that the salaries for full-time employees in SS&TP last year averaged $83,300. The park has been home to 2,470 jobs, including about 1,000 Sandia Labs jobs. The park’s activities have created an additional 4,123 indirect jobs throughout the regional economy for a total of 6,593 jobs, according to the report.

“The purpose of the park is to create high-quality, high-wage, long-term jobs,” said Sherman McCorkle, chairman of the board of the SS&TP Development Corp. “Our track record has been strong.”

Public investment since the park was established has been more than $89 million, including the U.S. Department of Energy’s contribution for the Master Development Plan, Sandia’s management of the park, land from Albuquerque Public Schools and the New Mexico State Land Office, and landfill cleanup by Bernalillo County, the report said. Other federal, state and local government entities helped the park by providing grants or matching funds, the report said. For example, the U.S. Economic Development Administration provided significant grants for secure fiber-optic communications and security network infrastructure. The city of Albuquerque also contributed to infrastructure improvements in the park.

“The report shows that investment in the park has been more than $368 million with 75 percent coming from private sources, and that’s a tremendous impact,” said Rob Leland, vice president and chief technology officer at Sandia Labs. “Sandia’s presence in the park shows its commitment to a continuing contribution to the community. Six Sandia facilities in the park employ more than 1,000 Sandia workers.”

The SS&TP is located next to Sandia Labs and Kirtland Air Force Base, giving park companies the ability to collaborate more easily with scientists and engineers from Sandia and the Air Force Research Laboratory (AFRL). Many park companies supply Sandia and AFRL with goods and services or have commercialized technologies that originated at the federal laboratories.

Sandia announced last month it would pursue a Center for Collaboration and Commercialization to strengthen partnerships, technology transfer and ties to the community. The center, known as C3, will be located in the SS&TP and support the city of Albuquerque’s and the University of New Mexico’s Innovation District and Innovate ABQ initiatives.