It’s been a challenge for Tonopah to keep decades-old equipment running while gathering the detailed information required for 21st century non-nuclear testing. Over the past several years, the 60-year-old Nevada range has changed the analog brains in instruments to digital, moved to modern communications systems, upgraded telemetry and tracking equipment and updated computing systems. 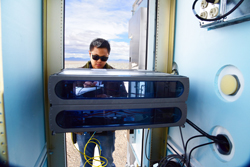 Mark Gonzales, an electromechnical technologist at Sandia National Laboratories’ Tonopah Test Range, takes measurements at one of the range’s remote fiber optic field cabinets as part of his duties at the Nevada range. (Photo by Jim Galli) Click on the thumbnail for a high-resolution image.

Tonopah is the test range for programs that extend the life of the nation’s aging nuclear weapons arsenal. The heart of the range’s far-flung network for tracking and gathering data is the telemetry ground station. Tonopah has two: a primary ground station at the control tower with three antenna dishes and a mobile telemetry trailer with a single antenna dish close to a target area.

More recently, the range added the ability to pipe telemetry data during tests back to Sandia Labs’ main site in Albuquerque in real time. First demonstrated in April 2015, it was enabled by the laboratories’ copyright Telemetry Analysis and Visualization Suite software. Team members in Albuquerque not only received the telemetry data during a March flight test, but saw the same displays of information from various subsystems shown at Tonopah and heard the audio from the control tower.

“That was great,” said Gary Sanders, now-retired vice president of Weapons Engineering & Product Realization. He and other Albuquerque listeners heard reports of the plane taking off, its test passes over the range and the test director checking in with system operators and range safety. “Plus we had knowledgeable people who told us about the test parameters and what we would be able to see on each telemetry screen. So we were able to watch each of the systems function, which I had never seen before. Two years ago we did not have this real-time telemetry capability. It is phenomenal.”

Tonopah took the first step toward the feed a few years ago by delivering still shots from a test to Albuquerque. Eventually, Sandia Labs expects near real-time, fully integrated communications telemetry, including video stream to Albuquerque.

“We can see the data remotely, which gives us better access to Tonopah,” he said. “I can sit here in my office in Albuquerque and participate in the range checkout in Tonopah,” a process that tells engineers that systems are functioning in advance of a test.

“It’s one of those situations where we didn’t know how much better we could do our jobs until we had the capability,” Hasekamp said. “It allows us to do our jobs more efficiently and precisely. It gives us better information and saves taxpayer dollars.”

Gary Ashcraft of the labs’ Telemetry and Software Systems organization said the B61-12 program began using the Telemetry Analysis and Visualization Suite software during telemetry system development and continued using it through ground testing and finally during flight tests and their analysis.

Telemetry stations gather radio frequency emissions from mock weapons being tested or the airplanes that carry them. Other instruments throughout the 280-square-mile range, including optical tracking telescopes and radars, follow a test unit during flight.

Basic telemetry systems haven’t changed much in three decades, but the required data rate has, said Gary Kirchner, a telemetry expert who travels from Sandia Labs in California to Tonopah for tests. Telemetry receivers around since the 1980s can perform at up to 2 megabits per second — but today’s tests need data rates of 5 megabits.

“Once the data rates for the B61-12 program were determined, it was clear that all current instrumentation needed extreme maintenance or upgrades,” Kirchner said. Tonopah replaced recorders, receivers, source selectors, amplifiers, antenna feed assemblies and hundreds of radio frequency and coaxial cables as well as monitors and other equipment in its four-story Test Operations Center at Sandia Labs’ compound. Most of the equipment replaced was more than 30 years old. 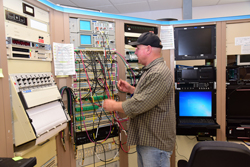 Three years ago, Tonopah replaced its mobile telemetry trailer with one that has a new antenna system, six telemetry receivers, a telemetry recorder and ancillary equipment.

About the same time, Tonopah refurbished two tracking antenna dishes at the compound, replaced two antenna control units and acquired a mobile backup system that eventually will be moved to the range’s east side for better overall reception.

Construction projects in the tower three years ago and last year “got rid of the old stuff and went digital,” replaced wiring and communications links and rid the tower of asbestos hazards, Simile said.

The research and development team of Stephanie Shreck, Steve Ohrt, Richard Crowder and Dave Flegel upgraded, integrated and validated new systems and closed the interoperability gaps that emerged in folding new equipment into a long line of legacy systems.

Jim Galli of Sandia National Laboratories’ Tonopah Test Range tracks a test unit with a telescope during a test at the Nevada range.  (Photo by Dale Green) Click on the thumbnail for a high-resolution image.

Upgrades extend to field equipment as well. Analog innards have been swapped for digital in Tonopah’s cinetheodolites or cines, combination photo-recording and surveying instruments that look like miniature astronomy observatories and track and photograph targets. Simile said cines were converted two years ago as manufacturers phased out film. In the meantime, Tonopah bought all the film and film-processing chemicals possible so cines could keep shooting film until converted.

A 1950s-era tracking telescope built at Sandia Labs’ long-gone foundry on top of an old Navy gun turret looks much like it did originally. But inside, its hydraulic drive has been replaced with a DC drive control systems and new high-speed digital camera, said Glen Watts, Tonopah’s technical team lead. The operator in the seat now uses a laptop, joystick and touch-screen monitor to operate the 117-inch-long telescope.

By fall, the operator on the mount will be gone as well. Tracking equipment now handled by operators at field sites will be controlled by a remote operator at the Test Operations Center.