ALBUQUERQUE, N.M. — Astra, the world’s fastest Arm-based supercomputer according to the TOP500 list, has achieved a speed of 1.529 petaflops, placing it 203rd on a ranking of top computers announced at The International Conference for High Performance Computing, Networking, Storage, and Analysis SC18 conference in Dallas. 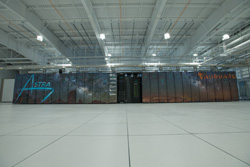 The Astra supercomputer at Sandia National Laboratories, which runs on Arm processors, is the first result of Sandia’s Vanguard program, tasked to explore emerging techniques in supercomputing. (Photo by Regina Valenzuela). Click on the thumbnail for a high-resolution image.

A petaflop is a unit of computing speed equal to one thousand million million (1015) floating-point operations per second.

The supercomputer is also ranked 36th on the High-Performance Conjugate Gradients benchmark, co-developed by Sandia and the University of Tennessee Knoxville, with a performance of 66.942 teraflops. (One thousand teraflops equals 1 petaflop.)

Astra is one of the first supercomputers to use processors based on Arm technology. The machine’s success means the supercomputing industry may have found a new potential supplier of supercomputer processors, since Arm designs are available for licensing.

Arm processors previously had been used exclusively for low-power mobile computers, including cell phones and tablets. A single Astra node is roughly one hundred times faster than a modern Arm-based cell phone, and Astra has 2,592 nodes.

“These preliminary results demonstrate that Arm-based processors are competitive for high-performance computing. They also position Astra as the world leader in this architecture category,” said Sandia computer architect James Laros, Astra project lead. “We expect to improve on these benchmark results and demonstrate the applicability of this architecture for NNSA’s mission codes at supercomputer scale.”

Less than a month after hardware delivery and system installation, Astra reached its first goal of running programs concurrently on thousands of nodes.

The next steps include transferring mission codes to Astra from existing architectures used to support the NNSA mission. While this step can be challenging for Astra’s new architecture and compilers, the real effort will likely involve a continuous cycle of performance analysis, optimization and scalability studies, which evaluate performance on larger and larger node counts to achieve the best possible performance on this architecture.

The Astra supercomputer is itself the first deployment of Sandia’s larger Vanguard program. Vanguard is tasked to evaluate the viability of emerging high-performance computing technologies in support of the NNSA’s mission to maintain and enhance the safety, security and effectiveness of the U.S. nuclear stockpile.

Astra was built and integrated by Hewlett Packard Enterprises, and is comprised of 5,184 Cavium ThunderX2 central processing units, each with 28 processing cores based on the Arm V8 64-bit core architecture. “While being the fastest in the world is not the goal of Astra or the Vanguard program in general,” said Laros,  “Astra is indeed the fastest Arm-based supercomputer today.”