ALBUQUERQUE, N.M. — A team of researchers from Sandia, Lawrence Berkeley and Pacific Northwest national laboratories tested a “sponge-like” mineral that can “soak up” uranium at a former uranium mill near Rifle, Colorado. 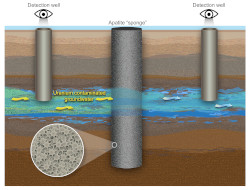 The researchers found that the mineral, calcium apatite, soaks up and binds uranium from the groundwater, reducing it by more than ten-thousandfold.

“The apatite technology has successfully reduced the concentration of uranium, vanadium and molybdenum in the groundwater at the Rifle site,” said Mark Rigali, the Sandia geochemist leading the project. “Moreover, the levels of uranium have remained below the Department of Energy’s target concentration for more than three years.”

The contaminated mill site near Rifle is about 180 miles west of Denver. Since 2002, the DOE’s Office of Legacy Management has used the site to test a variety of different uranium-remediation technologies.

All forms of uranium are radioactive, and it is toxic when ingested. Molybdenum and vanadium, on the other hand, are beneficial at very, very low levels, but are toxic at high concentrations. While the Rifle test site is remote, there are thousands of sites around the world that are similarly contaminated with radioactive elements and heavy metals that threaten groundwater, surface water and food supplies.

Calcium apatite is a mineral commonly used in fertilizer and is also a major component of bones and teeth. The researchers formed a “sponge” in the ground by injecting two inexpensive and nontoxic chemicals, calcium citrate and sodium phosphate, into a well especially designed for injecting solutions underground at the former uranium mill.

Once in the ground, helpful soil bacteria ate the calcium citrate and excreted calcium in a form that allows it to rapidly react with the sodium phosphate to form calcium apatite, which coated sand and soil particles underground, forming the sponge. The apatite sponge captures contaminants, such as uranium, as it forms on the soil particles around the injection well, and afterward as the groundwater flows through the rough sponge. Once formed, the apatite is incredibly stable, and can hold onto captured contaminants for millennia.

Soaking up half of the periodic table

“The apatite-based approach for uranium remediation has been by far the most effective and long-lasting without any significant negative side effects,” said Ken Williams, the environmental remediation and water resources program lead at Lawrence Berkeley. “It’s basically been a win-win-win situation. The first win is the ease of operation with only one injection needed. The next win is uranium being removed to incredibly low levels. The third win is the lack of significant deleterious consequences.” 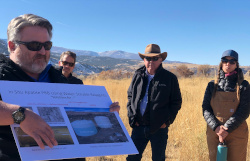 Williams has been testing different uranium remediation techniques at the Rifle site for more than a decade, since he was a graduate student. As a student, he was involved in a project at the site where they fed soil bacteria vinegar to remediate uranium that had some unfortunate side effects.

The apatite remediation technology was invented by former Sandia chemical engineer Robert Moore. It has been used at the DOE’s Hanford Site in southeastern Washington state to protect the Columbia River from strontium-90, another radioactive isotope.

Geologists know that apatite can capture elements from more than half of the periodic table of elements, Rigali said, but the team conducted initial laboratory-based tests to confirm apatite would bind dissolved uranium. These tests were conducted by Jim Szecsody, a geochemist at the Pacific Northwest National Laboratory.

In addition to reducing the amount of uranium in groundwater more than ten-thousandfold, Williams and Rigali found that the apatite reduced the amount of vanadium by more than a hundredfold. Vanadium is another contaminant left over from uranium milling, along with molybdenum, selenium and arsenic. Auspiciously, the apatite-based remediation technology captures these other toxic chemicals too, they said.

The future of apatite remediation

Computer modeling by Sandia geoscientist Pat Brady suggests that the uranium will remain contained within the apatite mineral for tens of thousands of years — possibly longer than the mill site flood plain will remain in its current location adjacent to the Colorado River, Rigali said.

Williams will continue measuring the amount of contaminants in the groundwater downstream of the apatite sponge every month until the sponge is “full.” This will allow the research team to learn how much uranium and other contaminants the apatite can hold, and when the sponge would need to be “refreshed” with more apatite, he said.

The apatite technology is being considered for use at several other contaminated locations, both federally managed and privately owned, said Rigali. Also increasing the potential applicability of apatite remediation is the fact that it can be “tuned” to capture different contaminants of concern including lead and arsenic.

“The apatite family of minerals is very large,” he added. “And they all have varying abilities to capture and store contaminants. You can literally tune the structure of apatite to go after specific contaminants of concern.”

Copper apatite, for example, is a great sponge for arsenic.

“This has been one of the most rewarding projects that I’ve gotten to work on at Sandia,” Rigali said. “It’s great to have these types of opportunities because you feel like you’re doing something that is solving a problem and making a difference. I know this technology could be used at dozens of sites for uranium remediation.”

The test in Rifle was funded by DOE’s Office of Legacy Management, while the development of original apatite remediation technology was supported by Sandia’s Laboratory Directed Research and Development program.