ALBUQUERQUE, N.M. — A 30-year program that made flying safer through continued innovations in airplane inspection, maintenance and airworthiness research has ended its tenure at Sandia National Laboratories. 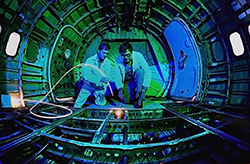 Sandia National Laboratories’ Dennis Roach, left, and Ken Harmon (retired) examine the inside of a Boeing 737 for long-term structural fatigue. Nondestructive techniques allow inspectors to assess the integrity of aircraft structures without disassembly.  (Photo by Randy Montoya) Click on the thumbnail for a high-resolution image.

The Federal Aviation Administration Airworthiness Assurance Center, or AANC, operated by Sandia for the FAA, is moving to the National Institute of Aviation Research at Wichita State University to combine with another long-standing FAA center. The planned move supports shifts in structure at both Sandia and the FAA.

At the center, Sandia researchers partnered with staff from aircraft manufacturers, airlines, regulatory agencies, universities and industry to develop inspection and maintenance systems for airplanes. The original focus was on developing nondestructive inspection techniques for aging airplanes and then grew to include airworthiness assurance needs throughout the lifetime of all aircraft systems.

“Our goal was to develop the technology, prove the technology and, just as importantly, transfer the technology to industry so it could be used routinely to ensure flight safety,” said Senior Scientist Dennis Roach, Sandia’s lead engineer at the center. “The AANC at Sandia became a trusted source of unbiased technology development and validation for an array of programs.”

The center also collaborated with other industries and all branches of the military on multiple engineering system and reliability needs.

Roach said the center staff adapted to and created many changes in the aviation industry. For example, the sole focus on metallic structures shifted into research in composite structures as the next generation of aircraft used these materials as their primary structure. Similarly, hand-deployed nondestructive inspection methods gave way to automated Structural Health Monitoring as the center led the way to the introduction of on-board sensors and use of smart structures to improve damage detection on aircraft. 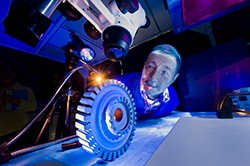 Sandia National Laboratories’ Mike Bode (retired) uses high-fidelity optics and phased array eddy current methods to inspect the hub of an engine blade for cracks in the dovetail assembly. (Photo by Randy Montoya) Click on the thumbnail for a high-resolution image.

Some projects of note, including spin-off programs for other industries, include:

Space shuttle program: After the space shuttle Columbia accident, the center worked on NASA’s Return to Flight program to develop an inspection system to certify each space shuttle before launch.

Monitoring bridge health: Expertise from the center’s airplane safety research was applied to monitor the health of bridges.

Aircraft designs for tomorrow: In its work to deploy advanced aircraft maintenance technology and new materials, the center teamed with over 300 companies and government organizations and conducted Strategic Partnership Projects in 10 countries. 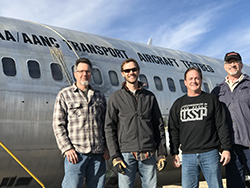 Sandia National Laboratories’ members of the Airworthiness Assurance Center team, from left to right, Clay Newton, Stephen Neidigk, Dennis Roach and Tom Rice, with the 737 aircraft test bed. The 737-200 aircraft, more than 50 years old, served as a full-scale test bed after its career as a passenger plane. The test bed helped develop numerous inspection programs at the center hangar facility Sandia operated at the Albuquerque International Sunport. (Photo by Randy Montoya) Click on the thumbnail for a high-resolution image.

“I never could have imagined back in 1990 that this program would end up spanning 30 years and contribute so much to commercial aviation safety,” said Dave Galella, FAA program manager. “It was incredibly comforting to know that whenever a new airworthiness challenge arose, I could pick up the phone and have access to the vast expertise that resided at the Sandia-AANC.”

During its time at Sandia, the center has received dozens of patents, won nine “Better Way” awards from the Airlines for America and FAA, produced more than 500 publications and formal procedures and helped develop regulatory measures to advance the aviation, aerospace, oil and gas, renewable energy, automotive and nuclear energy industries. The team worked on multiple international committees to produce worldwide standards for aircraft maintenance.

“The AANC has been a highly successful collaboration offering the opportunity to develop new technologies for aviation assurance that further enabled structural health monitoring for our core NNSA physical security program and other programs,” said Sandia director Gary Laughlin. “Dennis Roach has been a central figure and leader both technically and programmatically in the program from its inception.”

All of the assets acquired during the program, including nondestructive inspection equipment, test specimens, custom tools, new inventions and an aviation document library were loaded into trucks in late April and transferred to a new hangar at Wichita State University. Most Sandia researchers working at the center have retired or transferred to other projects at Sandia, while Roach said the transition lines up with his planned retirement and movement into aviation consulting.

Roach estimates that more than 100 Sandia researchers contributed to projects at the center. The program brought in $120 million in funding over 30 years and led to an additional $30 million from industry partnerships.